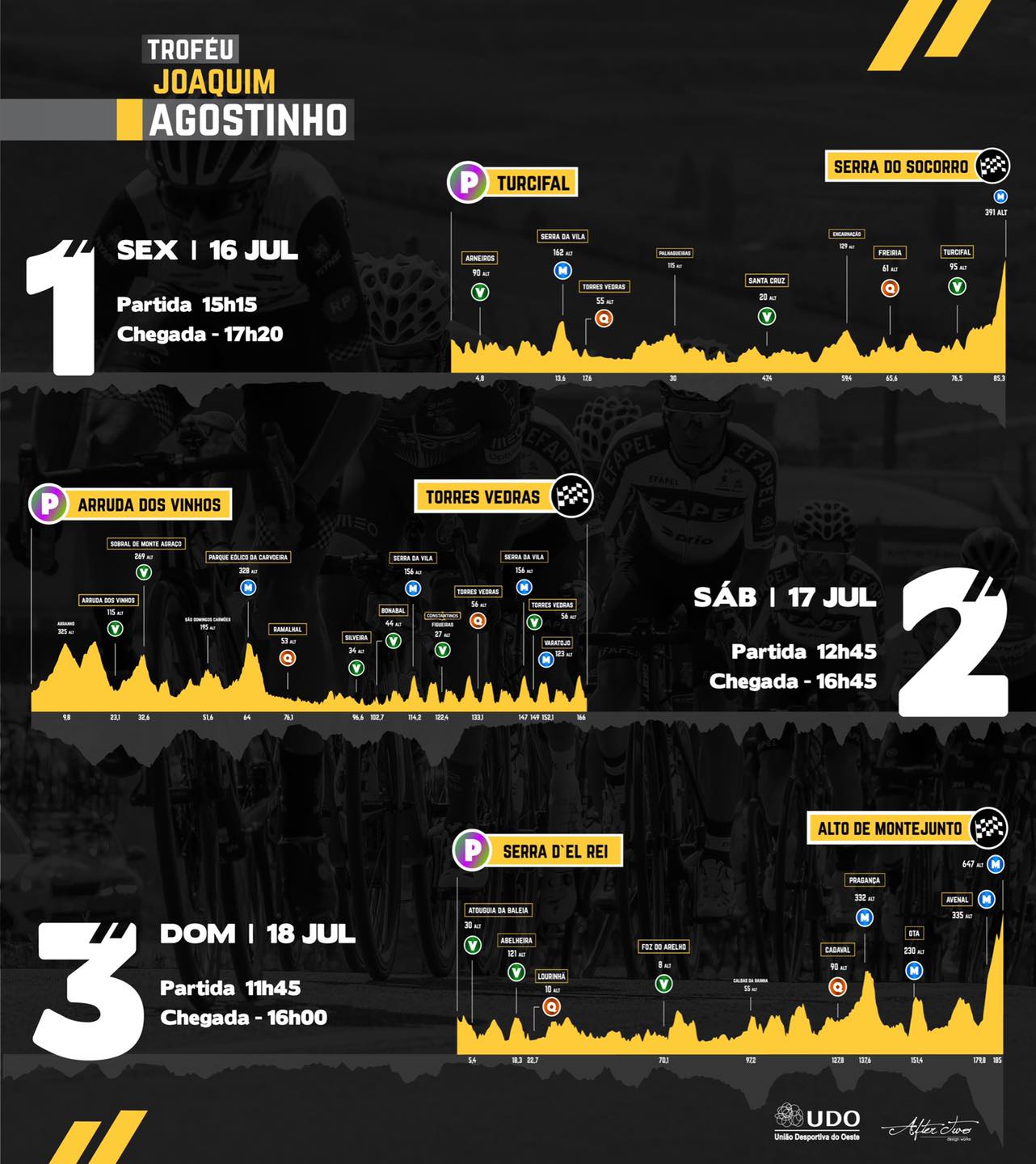 José Neves (W52-FC Porto) won the third and last stage of the 44th International Grand Prix of Torres Vedras – Joaquim Agostinho Trophy, a 185-kilometre stage, between Serra d’El Rei and the Alto do Montejunto (4,9 km at 6%), which crowned Frederico Figueiredo (Efapel) as winner of the general classification. The Portuguese champion beat his compatriot Frederico Figueiredo (Efapel), with the young (21 years old) Spaniard Jokin Murguialday (Caja Rural-Seguros RGA) finishing third at 21 seconds. The top two general classification riders, José Neves and Frederico Figueiredo, stood out in the final climbing seven kilometres of the stage and firstly to pursuit Jokin Murguialday, after his early attack, then with an action in the last 2 km of the race. All attempt by the W52-FC Porto man to distanziate the rival were unsuccessful but at least José Neves didn’t give up and managed to win the stage. Leader of the overall classification since his victory in the opening stage, Frederico Figueiredo is the final winner of this 2021 edition, with José Neves (+ 15″) and Jokin Murguialday (+ 1’33”) on the podium. For full results: @trofeujoaquimagostinho

The 44th edition of the Torres Vedras International Grand Prix / Joaquim Agostinho Trophy has a route that favours those more suited to climbing, as two of the three stages have an uphill end. The first stage will end on Sierra de Socorro after 85.3 km. A short stage, but with a demanding 3rd category finish (with ramps at 20 percent). Then follows the stage between Arruda dos Vinhos and Torres Vedras which includes ascents to Varatojo and Serra da Vila. And the Queen and last stage ending at Alto de Montejunto.
Patecipating teams includes the Spanish teams of Burgos, Caja Rural and Euskaltel, the Israel Cycling Academy, Protouch (South A.) and Vino-Astana Motors (Kazakhstan).

Last year winner of the GP Torres Vedras – Joaquim Agostinho Trophy, Frederico Figueiredo (Efapel) won the first stage of the 2021 edition. He attacked the steep climb up the Serra do Socorro, a climb of 2,3 km at 10.6% average gradients with a pick of 21%, to cross the finish line alone. He was 15 seconds ahead of his compatriots José Neves (W52-FC Porto) and Joao Benta (Radio Popular Boavista). The 30-year-old Figueiredo is now the favourite for the GC victory.

The race – At kilometre three Hugo Nunes (Rádio Popular-Boavista), Marvin Scheulen (LA Alumínios-LA Sport), Antonio Soto (Euskaltel-Euskadi), David González (Caja Rural-Seguros RGA) and Gustav Basson (ProTouch) attacked. They were soon joined by Gonçalo Amado (Antarte-Feirense). The lead of the breakaway reached 3 minutes, but W52-FC Porto took the front of the peloton and kept the fugitives under control. The breakaways attempt ended just before the final climb of Serra do Socorro. The uphill natural selection was unavoidable and the best climbers stood out since the first ramps. With 600 metres to go, when the head of the race was composed of six runners, Frederico Figueiredo attacked for the victory. “As the stage was only in the afternoon, we came here this morning to recognise the course. I saw that 600 metres from the end the ramps were very hard and that was the place to attack,” says the stage winner Figueiredo.

The third and last stage of the GP Torres Vedras – Trophée Joaquim Agostinho, which was held on Sunday at the top of the Alto do Montejunto (4,9 km at 6%), was won by José Neves, rider of the W52-FC Porto team. The Portuguese champion beat his compatriot Frederico Figueiredo (Efapel), whereas the young (21 years old) Spaniard Jokin Murguialday (Caja Rural-Seguros RGA) finished third at 21 seconds. Leader of the overall classification since his victory in the opening stage, Frederico Figueiredo is the final winner of this 2021 edition, with José Neves (+ 15″) and Jokin Murguialday (+ 1’33”) on the podium.

The Giro of Italy 🇮🇹 is just around the corner and this is our line-up for the next 10 days.