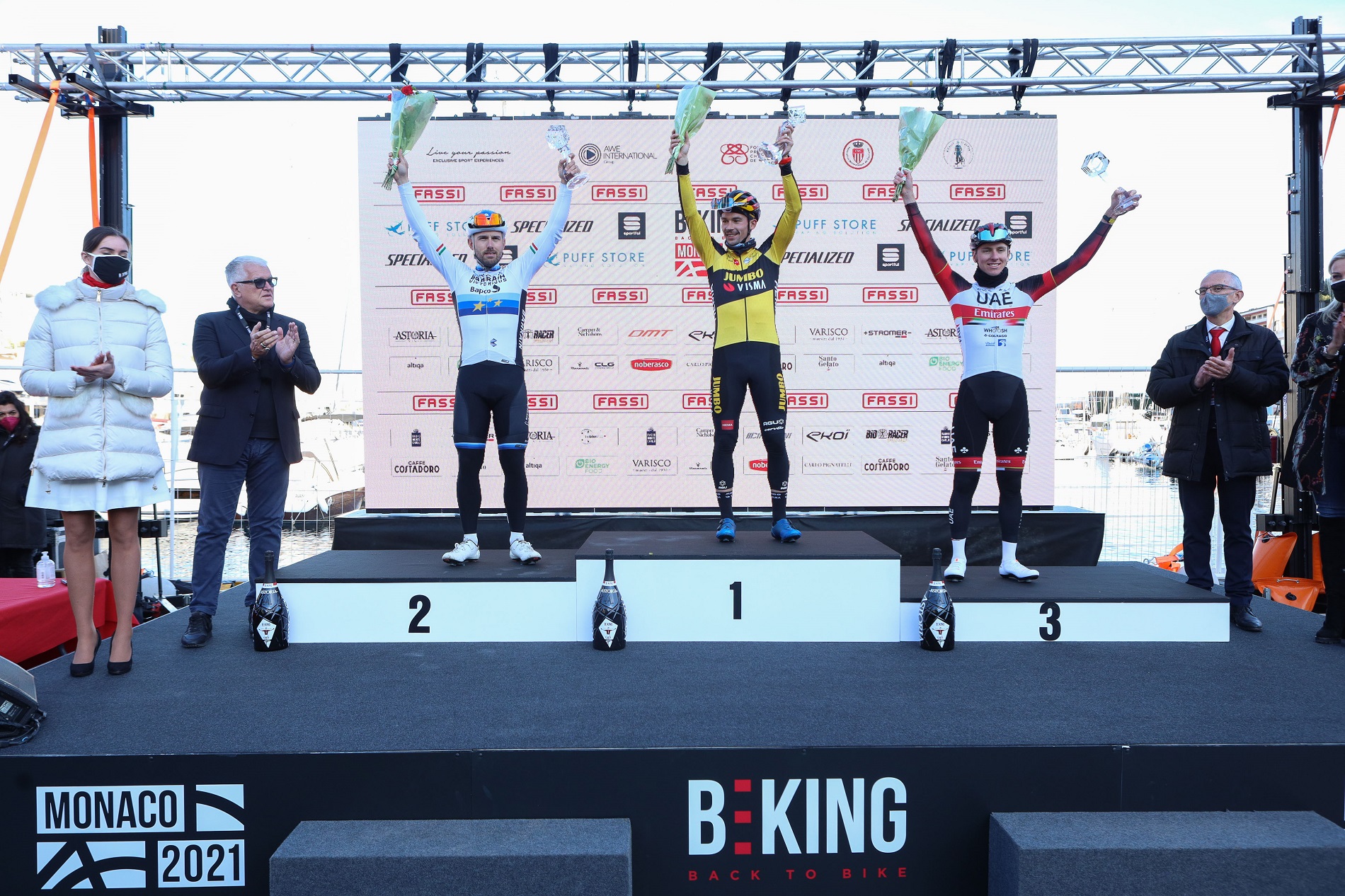 Press Release from the organisation.

Monaco, 28 November 2021 – Primoz Roglic wins the 1st edition of BEKING Monaco – an event dedicated to cycling, solidarity and the theme of sustainable mobility conceived by Matteo Trentin in collaboration with AWE International Group and Live Your Passion. The Slovenian Lotto Jumbo champion crossed the finish line ahead of Italian Sonny Colbrelli and Tadej Pogacar.

The day opened with a Pro/Am which saw 12 teams – each made up of two professional cyclists, an ambassador of the Charlene de Monaco Foundation and two amateurs – engage in a team time trial to raise funds for the Michele Scarponi Foundation and the Monegasque Foundation.

In the afternoon, Prince Albert of Monaco kicked off the Criterium, during which the 40 champions, the elite of international cycling, competed on a 1.3km course to be repeated 40 times.

The winner was awarded by Romy Gai, president of AWE Group International and Claudia Morandini, organisers of the event.

“It was a fast and difficult race from the beginning and in the last laps the best riders stayed in the lead – commented Primoz Roglic at the end of the race – it is always nice to win and I think it was a great event, it was important to participate and to be involved in this cause. This was the last race of a season that has had its ups and downs for me, now I am slowly starting to prepare for the next one.

“I thank Claudia and Matteo for organising this fantastic day, it was nice to participate and come back to the race after the Roubaix – said Sonny Colbrelli – I am happy to have brought another podium to end this extraordinary season”.

“The success of this next edition makes us very happy and rewards us for the efforts made to organize it and encourages us to work already for next year, the idea behind Beking was not an event for professionals but a day dedicated to cycling in which we wanted people to participate in cycling with children – said Matteo Trentin, creator of the event – the race was very enjoyable, especially when you have the elite of the world cycling is already a great result and the circuit was designed to entertain everyone, not only the professionals”.

On Sunday 28 November, the Principality of Monaco will host the first edition of the BEKING Monaco event, a day of sport, awareness and solidarity that will see the best cyclists of the moment, athletes from other disciplines and former athletes competing on an unusual street circuit in a Criterium and a charity Pro/Am in favour of the Fondation Princesse Charlène de Monaco and the Michele Scarponi Foundation.

THE PRINCIPALITY OF MONACO PREPARES TO WELCOME THE FIRST EDITION OF BEKING MONACO – THE CYCLING CHAMPIONS HAVE ALREADY STARTED TO MEET, GIVEN THE EVENT THAT WILL BRING IN THE CITY, THE BIG NAMES OF CYCLING AND OTHER DISCIPLINES FOR A DAY OF SPORT.

Trentin, Sagan, Stuyven, Wellens, Valgren, Gilbert, Kruijswijk, and Hushovd posed for a photo shoot, getting together for the first time given the event, organized by AWE International Group in collaboration with Live your Passion, which on November 28 will bring them to face each other in a race on an unprecedented track, in the evocative and elegant setting offered by the Principality of Monaco.

Monaco, November 17, 2021 – Matteo Trentin, creator of BEKING Monaco and 2018 European champion, three-time world champion Peter Sagan, Philippe Gilbert, 2012 world champion, Steven Kruijswijk, Jasper Stuyven winner of the last Milano Sanremo, Tim Wellens, Michael Valgren, and Thor Hushovd, world champion met with enthusiasm to share the values of the first edition of the event that, on Sunday, November 28, will see them face each other in a race on a brand-new course.

Monaco, home to one of the most evocative Formula 1 GPs and the Monte-Carlo Rolex Masters, will become the world capital of cycling for a day, hosting for the first time an event that will unite the big names of the World Tour circuit, champions from other disciplines and former athletes who live in the Principality for a unique show. BEKING Monaco, organized by AWE International Group in collaboration with Live your Passion, has been included in the official UCI 2021 calendar and represents the only event for professional cycling in the period between the season just ended and the new season.

Visiting the site www.bekingevents.com it will be possible, for everybody, to register to the Pro/Am to have the possibility to run together with their favourites. Each team will be composed of two professional cyclists, 1 ambassador, and two amateurs.

<I don’t live in Monaco but I was invited by Matteo Trentin, we have a beautiful friendship that goes beyond cycling. Racing side by side with so many colleagues and friends in Monaco will be a unique emotion, I can’t wait to get on my bike to try the circuit designed for the occasion – says Sonny Colbrelli – we are in a break from racing and we are all resuming training, it will be exciting to compete in a new competition and at the same time give life to a day of sport, solidarity, and awareness>.

<I’m really happy because we’ve managed to organize an event in the Principality that will demonstrate how it’s possible to use the bicycle in a very busy city like Monaco and at the same time emphasize the positive aspect of cycling, namely that of a lifestyle that allows physical activity and reduces the number of cars in circulation, a challenge that is involving several big cities in the world – declares Philippe Gilbert – thanks to Beking we will also be able to demonstrate how cycling is functional to the discovery of territory like the French Riviera, our sport is for me one of the most beautiful because it allows you to train in any country in the world, in any direction; This is the freedom of cycling.

Also a class performance of our U23 rider @JenteMichels, finishing 9th in the elite race! 👏👏👏

Change on the horizon for Annemiek van Vleuten

'I'm confident that I'll find something new, but I like going out of my comfort zone' says Tour de France winner ahead of final season in pro cycling