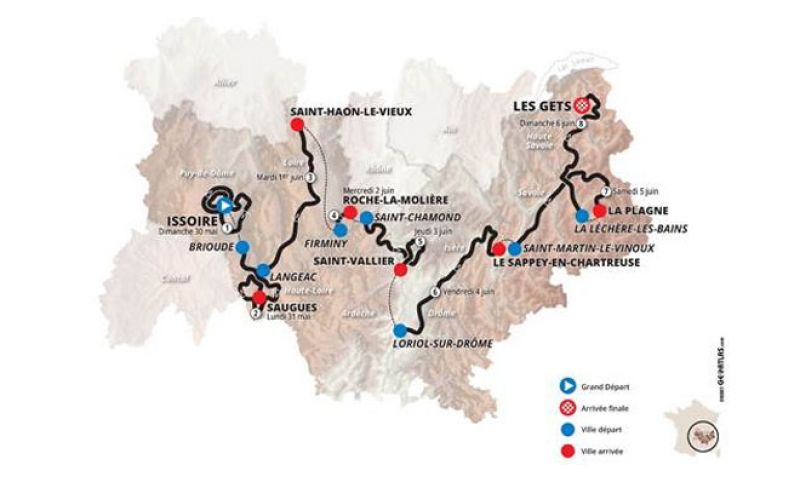 The route for the 2021 edition of the Critérium du Dauphiné (May 30 – June 6) has been officially released and features 3 mountain stages all with summit finishes, an individual time trial, 3 hilly stages and 1 stage for sprinters. The participating teams have also been announced: 21 teams, 19 of the World Tour were invited by right, and 2 Wild Cards that went to B&B Hotels and Team Arkéa-Samsic. The Alpecin-Fenix chose not to participate, the team instead will opt for the Tour of Switzerland.

The route of this edition was designed to gradually raise the difficulties in a “journey” that starts from the Massif Central and ends at the Alps.

The riders will face a challenging first stage that will favour punchers as the the hilly route might prove beyond the pure sprinters capabilities. Starting and finishing in the town of Issoire, the stage will take in seven categorised climbs. The race will open with a leg of almost 182 kilometers around the town of Issoire. The stage will be characterised above all by a final circuit of 37 km to be repeated 3 times, with the presence of two GPM, Côte du Château de Buron (3.2 km at 6.8%) and Col de la Croix des Gardes (1.6 km at 5.1%). The last climb will be 12 km from the finish and certainly some finisseurs will try to attack, but due to the very few opportunities for them, the sprinter teams will certainly try to keep the peloton together.

Stage two is the first real challenge for the GC riders as they ride from Brioude to Saugues over very hilly terrain. The conformation of the stage seems to favour an early breakaway and after 46km from the start, the riders will face the first 1st Cat. race ascent, The Col de Peyra Taillade (8.3km 7.4% max gradient 14%). In the final kilometres, two climbs (one second and one fourth category), the Côte de la Forêt de Pourcheresse (6.9 km at 6.4%) and the short climb of the Côte de Masset (1.5 km at 5.1%). This finale seems perfect for the first skirmishes between the favourites for the GC.

In theory, this is the only stage for fast wheels in the field as they ride from Langeac to Saint-Haon-le-Vieux. After the departure from Langeac, the riders will have to face a rather hilly path for all the first part of the stage. Only after Monbrison the riders will find flat terrain that will take them to the finish line of Saint-Haon-Le-Vieux after 172.2 km to probably end the stage in the sprint. Watch out for the final. it can be tricky with the last 800 meters slightly uphill.

THIS TIME ITS VICTORY FOR COLBRELLI ON STAGE 3 AT DAUPHINE. Full article @TeamBahrainVictorious and full results by procyclingstats.com

This individual time trial goes over hilly terrain with a slight uphill finish between Firminy and Roche-la-Molière. The 16.4km will have a lot of variation, lots of turns to the left and to the right, ups and downs. Therefore it’s not for the pure specialists. The favourites for the GC will have to be careful in this stage judgement, and some will certainly loose some ground today.

The 175.4 kilometers of the fifth stage, from Saint-Chamond to Saint-Vallier, seems to be tailored to puncheurs or classics specialists. They could take advantage of the many ups and downs present on the route and in particular the last two GPM, the Col de Barbe Bleue ( 2.1 km at 6.2%) and the Côte du Montrebut (1.3 km at 12%). The category 2 Côte du Montrebut comes just over 12km from the finish and serves as an ideal springboard for the potential attackers.

The first summit finish comes on stage six. The 167.2 km from Loriol-sur-Drome to Le-Sappey-en-Chartreuse present a completely flat first part of the route, and then place four successive ascents in the last 50 kilometers, including the uphill arrival of the Montée du Sappey-en-Chartreuse (3.3 km at 6.2%), which will begin to design the ranking.

The stage seven has a similar length of the previous one but mountains are much tougher, first HC climbs with the Col du Pré and with a finish on La Plagne. The stage presents a first part of the route flat, and then concentrates the ascents in the last 100 kms, including two hors categories, the Col du Pré (12.6 km at 7.7% ), to be crossed when there are still 60.9 km to go to the finish line) and La Plagne (17.1 km at 7.5%), which will also be the finish line. A tough day for the riders, and could decide an important part of the race.

On Sunday, the 147km grand finale will offer a succession of climbs ready to offers plenty of ground to recover for riders lagging behind in the overall standings. From La-Lechère-les-Bains to Les Gets, the peloton will not find much flat terrain and the riders will have to tackle a series of climbs. The roads of the Col des Aravis, the Col de la Colombière (11.7 km at 5.8%), the Côte de Châtillon and, above all, the Hors Category Col de Joux Plane (11.6 km al 8.5% and with peaks of 13%), are the ideal terrain for attacking. The summit of Col de Joux Plane will be at 16 km from the arrival, the riders descent up to less than 7 km from the finish line, where the road will rise again. The easier ascent to Les Gets (2.4 km. at 4.6) will conclude this “festival” of climbs.

Tom Dumoulin: I'm not yet at the level I need for the Olympic Games