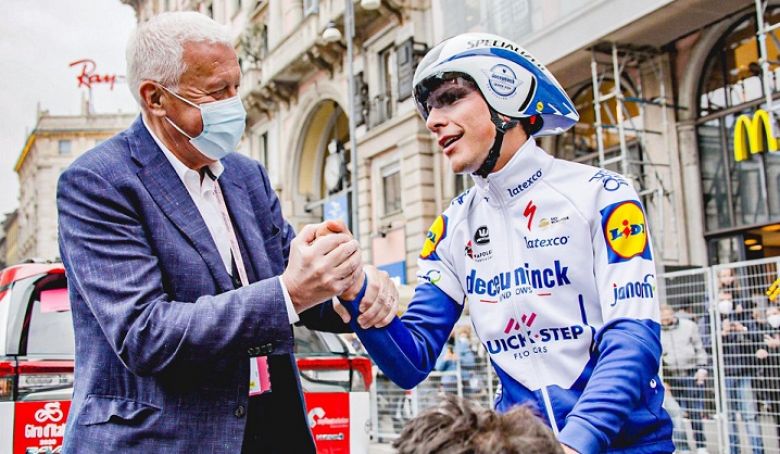 Juan Ayuso (Colpack-Ballan) the today winner of the ‘Baby Giro’ will join UAE Emirates from the 1st August 21. The Spanish rider secured his overall victory, after winning three stages including the “queen stage”. “The next big thing” in Spanish cycling won the Giro d’ Italia U23 race at just 18 years old, becoming the youngest “Baby Giro” champion in history. He now joins a stellar list of recent winners including Tom Pidcock, Aleksandr Vlasov and Joe Dombrowski. Early last year, at the age of 17, Ayuso signed a five-year deal (that will end in 2025) with the UAE Emirates last year and until the 31 July will stay with is current team, the Italian Colpack-Ballan. Ayuso full rider profile @ procyclingstats.com

During Radiocorsa, a popular cycling TV programme, broadcasted by RAI, the Italian National Television, the journalist Beppe Conti has confirmed the possible renewal of Peter Sagan with Bora-Hansgrohe. The three-time world champion didn’t find an agreement with Deceuninck-QuickStep and he is no willing to reduce his salary.

The UAE Team Emirates is said to be looking for an experienced and strong on climb raider, (such Damiano Caruso?) to help Tadej Pogacar to mend a week point from his team and supporting him in the most demanding stages of the Tour de France. At the end of 2021, Caruso contract with Bahrain-Victorious expires and the Sicilian is thinking on his future aspirations (leader or top domestique?). The UAE has also targeted Maximilian Schachmann, while he intends not to renew the contract to Alexander Kristoff, linked with the ambitious Norwegian Uno-X Pro Cycling.

Several WorldTour teams are approaching Lorenzo Fortunato (Eolo-Kometa), the winner of the Zoncolan stage at the Giro d’Italia 2021. Rumours are linking the 25 years old from Bologna to Cofidis. In the French team, he could gain experience as a leader and investigate his full potential in the Big Tours.

Elia Viviani has struggled for victories since joining Cofidis from Deceuninck – Quick-Step in 2020. Next year, the Italian is said to be joining upstarts EOLO-Kometa, the ProTeam of the same nationality backed by Ivan Basso and Alberto Contador.

After spending the past two seasons at Trek-Segafredo, the 36-year-old Vincenzo Nibali is destined for pastures new, with Deceuninck – Quick-Step 9to mentor Evenepoel) and Astana – Premier Tech ( to work again with the staff of the most successful period of his career from 2013 to 2016) the two likeliest options.

Rohan Dennis is not expected to renew with Ineos Grenadiers when the Australian’s contract is up at the end of the year. Their rivals Jumbo-Visma are interested but the front runner at the moment is UAE Team Emirates.

Dutch publication Wielerflits understands that Cofidis’ Christophe Laporte will be on the move joining Jumbo-Visma next season. The Frenchman have already taken a couple of wins for himself this season.

Sam Bennett‘s future will be away from Deceuninck – Quick-Step. Rumours are suggesting he may move to Bora-Hansgrohe (securing a ride in the Tour de France) or, more surprisingly, to Ineos Grenadiers (the Irishman could be the team’s first top sprinter since Mark Cavendish).

Peter Sagan looks set to leave Bora-Hansgrohe at the end of the season after five years with the team. Deceuninck – Quick-Step have ruled themselves out, but the Slovakian have several alternatives. According to L’Équipe, Total Direct Energie are said to be interested, and also Israel Start-Up Nation have apparently expressed their desire to bring Sagan onboard.

At the end of his contract, at the end of this year, with the Deceuninck-Quick Step, Joao Almeida will no longer be a Belgian rider next year. And it is Patrick Lefevere, the general manager of Wolfpack, who personally announced it this Saturday (today) in the columns of Het Nieuwsblad. “João Almeida will leave our team at the end of the season. His agent has shown relatively little respect in the negotiations. He has too often said to me: ‘Patrick, I swear on my children’s head that …’. I am allergic to this statement. Anyone who is honest should not use such language. ” As a reminder, Joao Almeida was initially announced at UAE-Team Emirates, but BORA-hansgrohe now seems to be holding the rope according to the latest information.

Ineos Grenadiers and Pinarello together for another 4 years

We'll soon be onto the final climb of the race, the infamous Gotthardpass! 🏔

At the bottom of the Passo San Gottardo ⛰ with 50km to go, the @OmarFraile breakaway has 2’30’’on the peloton.