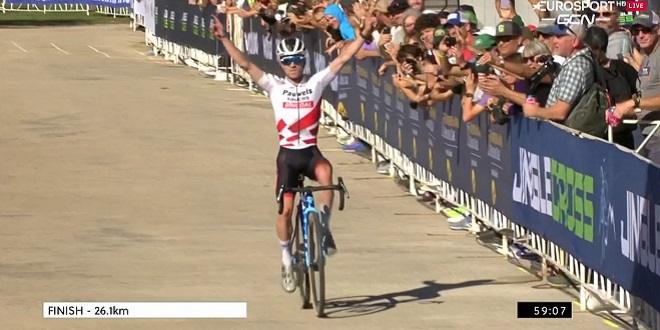 WorldCup – Cyclo-cross, Eli Iserbyt wins and reinforce his leadership in the overall standing

Eli Iserbyt wins the third race of the 2020/21 Cyclocross World Cup. The continental champion of the discipline won the third race on US soil, after a first and a second place in the first two races of the season, 11 seconds ahead of Lars van der Haar (Baloise Trek Lions) at the end of a thrilling race. Third place for Michael Vanthourenhout (Pauwels Sauzen-Bingoal) at 31 seconds from his compatriot. Fourth place for Toon Aerts (Baloise Trek Lions) ahead of Quinten Hermans (Tormans-Circus) who was fighting for the victory for a long time but then penalized by a fall in the final.

Marianne Vos took her second World Cup victory in Iowa City in convincing fashion. The 34-year-old Dutch rider finished solo after a strong performance in warm conditions. Vos recaptures the leader’s jersey with her second victory in the World Cup cross and can start her rest period with a good feeling. Full article @ teamjumbovisma.com

Quinten Hermans, who has been improving steadily in the last few years, took the biggest victory of his career by winning the second round of the cyclo-cross world cup in Fayetteville (USA) this Wednesday. On the circuit of the next world championships, the Belgian rider of the Tormans-Circus Cyclo Cross Team took off on the third lap of the race, before going on a real solo run.

The second round of the cyclo-cross world cup was held in Fayetteville (USA) – where the next world championships will take place – under a heavy rainfall and was won by the reigning world champion Lucinda Brand (Baloise Trek Lions). After having been neck and neck with Marianne Vos (Team Jumbo-Visma Women) during the first five laps of the race, the Dutch rider took advantage of the physical weakness of her compatriot at the beginning of the last lap to go for a convincing solo victory.

Marianne Vos is back on the throne of the cyclo-cross World Cup.

The incredible Dutch outclass, several times world champion in this specialty, won the first round in Waterloo in the United States of America overcoming compatriot and reigning world champion Lucinda Brand. Third place went to the other Dutchwoman Denise Betsema.

Continental team Cogeas-Mettler have applied for Women’s WorldTeam status and are to be named Roland Cogeas Edelweiss Squad in 2022, after securing the backing of baked goods brand Roland