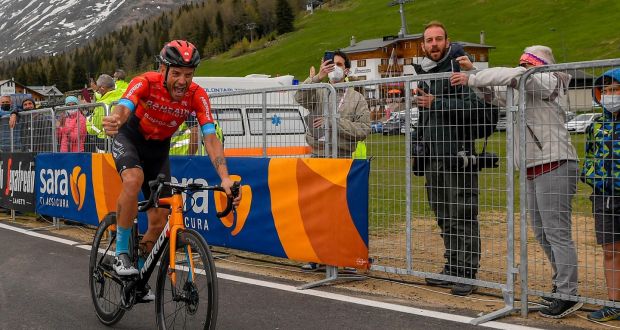 GIRO D’ITALIA 2021 : STAGE 20 – CARUSO SOLOS TO STAGE WIN, INEOS UNTROUBLED. Stage 20 of the Giro d’Italia didn’t deliver any GC fireworks but we were treated to a win for Bahrain-Victorious’s Damiano Caruso. Full article by EUANJV: velovoices.com

By Davide Cassani (official Facebook page). The Team Manager of the Italian National Cycling Team knows Damiano Caruso well and wrote this felt article on one of the riders he admires most. The below article has been freely translated.

Damiano Caruso is now on everyone’s thoughts. The ugly duckling (for those who did not know him) who becomes a prince, the domestique who becomes a captain. Damiano Caruso is a blond Sicilian, the son of a policeman, who has dedicated part of his life to cycling. He has always raced for others but he has never felt inferior to anyone. Damiano Caruso, 5 years ago, at the Olympic Games in Rio raced for us, Italy, and I want to remind you that I could only field 5 athletes. And he was among those 5. I was always struck by his generosity, his kindness, his niceness, his concept of team, his strength.
Today I felt a particular emotion in seeing him attacking. I was shivering. Yes, because I could imagine what was going through his head. I know Damiano well, very well.
He is an extraordinary guy who has always worked for others for a lifetime. The classic domestique, the one who first of all thinks of others then of himself. What if he was more selfish? What if he tried to think more about a personal victory, not caring about others? I believe that in life you have to follow your instincts, do everything possible without distorting yourself, always try to do something more and better and be ready when they ask you. But he would have earned more, he would have won more … maybe yes, maybe not. I’m sure Damiano has always tried to follow his instincts. As in these days.
Caruso is one of the most respected riders in the group, he is credible, respected but above all he gives the idea of ​​being a serene person, I say more: happy. Working for others, being a domestique does not mean being men or runners in Second Division. No, making yourself available means bringing something of yours to victory, which can be personal or for your team. And I can talk about these things because I have experienced them first hand and I have never regretted what I have done to support others.
And the greatness of a cyclist (and of a man) is measured by what he does. A cyclist who pulls the sprint to his team sprinter leading him at the last 200 meters, what does have less than his teammate? Someone like Martinez who pulls for miles and miles his friend in the pink jersey, is it not a champion for what he does? How many victories are the result of a perfect team work where everyone brings their own contribution to victory? This is the team where everyone sacrifices something of themselves for the common good. And the victory is for everyone, not just one. And Damiano Caruso is a champion. The team, as always, gave him a task: and he did it, as usual, in the best way. It is not a question of being a domestique or a capitan but of giving your best, regardless of your playing role.
At the end of the third stage, he told me: “I’m really fine Davide, you’ll see”. Yes, I saw. He not only went fast but he managed the Giro as the most experienced of captains. And not just defending but attacking, like today. But do you realize what he did him? He was second in the standings, a podium now within reach and despite this he took risks on the descent and went on the breakaway. Damiano, in 12 years as a professional, has won 3 races including today’s stage but has always been a winner. Because he has always improved, because he has always done in the best way the job they asked him to do.
“CARUSO I AM”. He said the other day. Here you are Damiano Caruso, and we, lovers of this sport, are proud of what you have and are doing in cycling. Not in this Giro but always.

All pictures and articles, copyright @ by the author, we use, are for editorial and non-commercial usages only)

I said I’d explain the @MarkCavendish situation, here it is:

Will we be seeing you tomorrow as we #QlikinforQhubeka?

For every km we ride, @qlik will donate $1 to @Qhubeka!

Register to join the Zwift rides or register and send us a screenshot of your longest #Strava ride during July.