Julian and Marion, the sexist scrutiny by L’Humanité 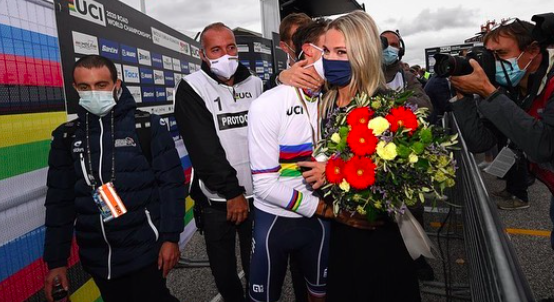 Julian Alaphilippe is the world champion of road cycling. The 28-year-old Frenchman was crowned on Sunday, September 27, 2020 at the Imola circuit in Italy. Alone to cross the finish line, the rider of the Deceuninck-Quick Step aroused great emotion among many viewers, but also among those who commented on the live event. Among them, was his partner Marion Rousse. She could not hold back her tears after his incredible win, struggling to continue to officiate at the microphone.

Twice a winner of the green jersey and Tour de France (2005, 2009), the former champion is now a commentator for French Televisions which meant that she had a front row seat to experience her partner’s victory. A unique moment captured on video by Thor Hushovd and published on social networks.

After a long period of rumours flying around, Rousse officially declared the couple were an item during an interview with French newspaper L’Equipe. The couple spent lockdown together in Andorra and have been living there together ever since. “I do not want my life to revolve around that”, explained the Parisian. “I remain the Marion as before! I will always be the same at comments, no matter my private life. I will always do my job the same and this is the most important for me.”

Unfortunately, no couple in the spotlight goes without scrutiny. The daily newspaper L’Humanité published a caricature signed by Espé, depicting Rousse mostly nude sitting on a bed and holding a microphone while interviewing Julian Alaphilippe. It was published alongside an article written by former cycling coach of the Festina team and columnist Antoine Vayer as part of his daily chronicle during the Tour de France. Backlash erupted across social media against L’Humanité for publishing the cartoon, calling it sexist, while sports journalists expressed support for Rousse. “I am disillusioned,” Rousse wrote in a post on Twitter. “L’Humanité lives up to its name less and less. You have to have no respect for women, to reduce six years of sports reporting on television to this level.”

Faced with a torrent of negative reactions to his drawing, L’Humanité has decided to remove it from its site. “We fully share the indignation at this drawing. We quickly unpublished it. It is contrary to the values of L’Humanité which promotes the dignity of human beings and the feminist struggle. We ask Marion Rousse to apologize for this lack of vigilance,” wrote the daily newspaper on Twitter. Alaphilippe refused to comment on the matter during a press conference, “I saw them (the cartoons) of course,” he said, “but I don’t want to talk about that at all.” L’Humanité fired its cartoonist Espé and former cycling trainer turned columnist Antoine Vayer, after the big buzz caused by a cartoon. Clearly, the media still has a long way to go in the daily fight against sexism.