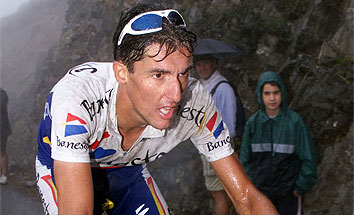 It’s been seventeen years since the former Spanish cyclist, José María Jiménez, nicknamed ‘El Chava’- the foulmouthed- died in a psychiatric hospital in Madrid at the premature age of 32. In 1993, he turned pro with Banesto and spent the rest of his career with the Spanish team. A four times winner of The King of Mountains at the Vuelta a España and the victor when that race headed up Angliru for the first time in 1999, ‘El Chava’ was a Spanish idol but relatively unknown outside of his home country.

Erratic, explosive, aggressive, exuberant, an anti-hero, Jiménez’s all or nothing approach divided his fans and ultimately spurred on his critics. He would show bold attacks that would excite the spectators but also infuriate his fans when he would collapse and lose time without care. But even his harshest critics would agree that when he was on top form you couldn’t keep your eyes off him. Sadly, he only showed strokes of genius and never really had the drive to go all way and become immortalised. Often tipped as the underdog in the Vuelta a España and Tour de France, Jimenez never reached the top step of the podium but succeeded in winning numerous stages in the Vuelta and the mountains classification on four occasions.

Jiménez liked to live life on the edge. He spiralled into the deep waters of alcohol and substance abuse and drifted off into the gloomy underworld- a world which he never recovered from. In 2001 he hung up his bike with the hope that one day he would return to the road, but two years later whilst suffering with severe depression, was admitted to a psychiatric hospital. On December 6, 2003, whilst showing photos of his cycling career to patients, he suffered a heart attack and died. More than two thousand people showed up to his funeral.

Attacking without considering the consequences sometimes resulted in spectacular wins in the toughest mountain stages. A particularly memorable instance occurred during stage eight of the 1999 Vuelta a España. Jiménez attacked the 23% gradient of the Angliru in the rain, fog, cold and wind- all the ingredients for an epic two-man sprint against Russian rider Pavel Tonkov. The weather conditions made it hard for the spectators at home watching on television but finally the headlights of the car appeared and ‘El Chava’ emerged from the fog as the winner. As he crossed the line, he did not have the energy for the victory pose. In the next stage, he paid the price for his attacking style and lost by ten or more minutes.

Jiménez’s erratic behaviour showed new heights before one stage of the Tour of Catalonia, he disappeared only to return just prior to the start in a new Ferrari he had decided to buy on a whim. He triumphed only in the Vuelta and relied on his innate ability to climb rather than making a big effort to win the Tour. “He was a rider in the old style,” former teammate Miguel Indurain said of Jimenez. “When things went well, they went very well. When things didn’t go well, they didn’t go at all. He lost a lot due to reasons beyond his work, leaving cycling like that… all of the sudden.”

Spanish cyclist Carlos Sastre, Jiménez’s brother-in-law, dedicated his 2008 Tour de France victory to Jimenez. He left this life too early,” Sastre said. “He was the guy who taught me the most about cycling and the guy who made me cry the most. This was the race he dreamt of winning, and making that gesture was a way of saying we crossed this finishing line together.”