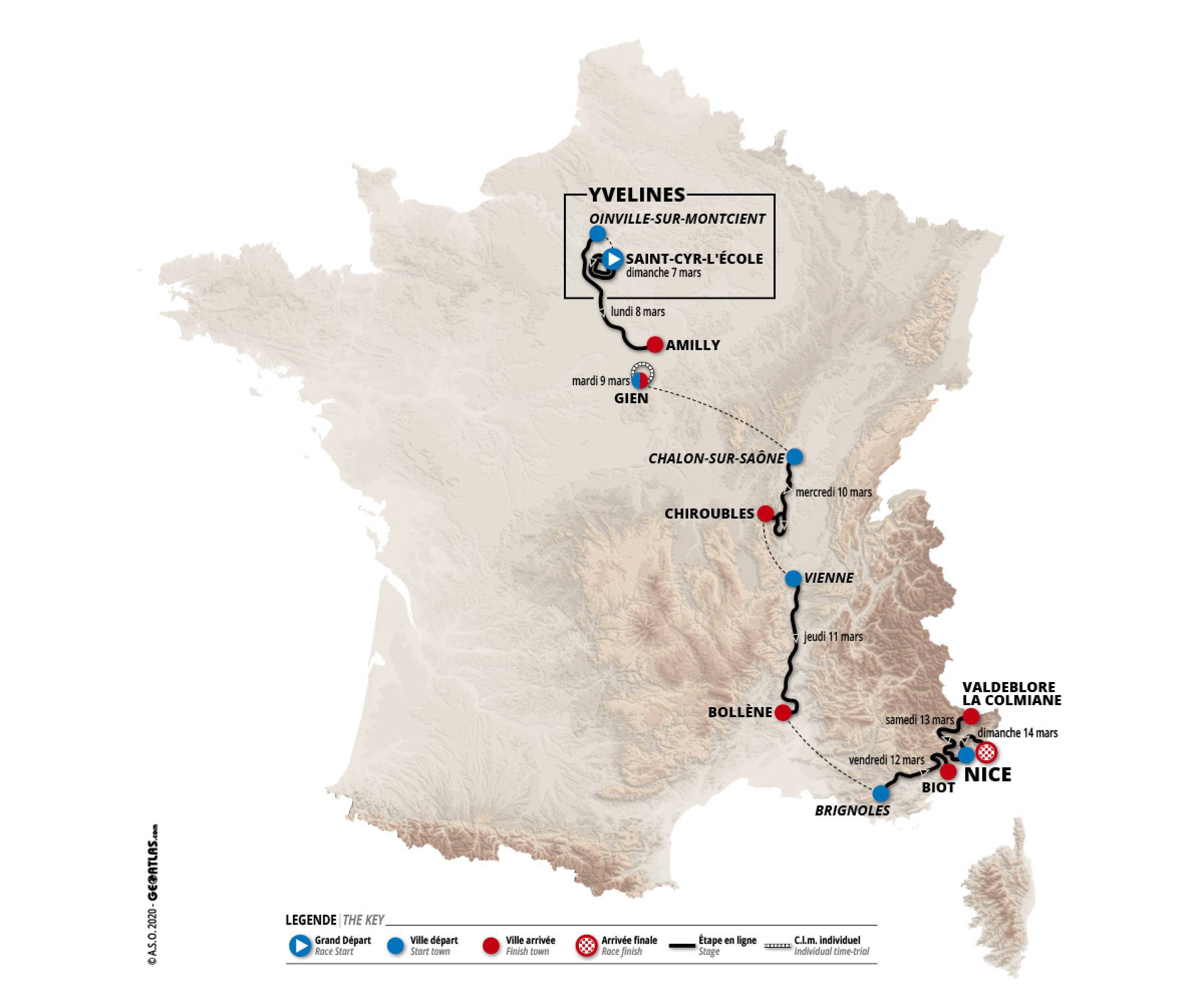 Stage 1: Sunday 7 March. SAINT-CYR-L’ÉCOLE – SAINT-CYR-L’ÉCOLE (166 km) The route of this stage consists in a long circuit of about 80 km to be repeated twice. The last 35 km of the circuit are a little complex , with some short climbs, including the GPMs of the Côte de Senlisse (1.1 km at 5.5% average gradient) and the Côte de Meridon (1.4 km at 5.2%). The hilly terrain and a short ramp of about 500m before the finish line could mess up the plans of the sprinter teams.

Stage 2: Monday 8 March. Oinville-sur-Montcient – Amilly (188 km)
Open for sprinters. Present a harmless GPM in the middle of the fraction, then a lot of plain to the finish where the fast wheels will play the stage.

Stage 3: Tuesday 9 March. Gien – Gien (14.4 km) ITT
Time-Trial for specialists able to maintain high speed along the 14km of this stage even if they will need to be cautious with 4 or 5 difficult turns at 90 degrees. All flat except 1 km in the initial stages and the last 300 m with a final straight with 6% gradients.

Stage 4: Wednesday 10 March. Chalon-sur-Saône – Chiroubles (187 km)
First stage really important for the general classification with a total of 7 Gpm. Last twenty challenging kilometers with the second category of Mont Brouilly (3 km at 7.7%) and uphill finish in Chiroubles, 7 kilometers at 6%.

Stage 5: Thursday 11 March. Vienne – Bollène (200 km)
Another flat stage, certainly suitable for sprinters. A 5% tear at 30km from the finish shouldn’t mess up the sprinter teams’ plans. The arrival in a sprint is almost certain.

Stage 6: Friday 12 March. Brignoles – Biot (202 km)
A very busy stage with 5 Gpm but all enclosed in the middle of the route. The last GPM will be 46 kilometers from the finish, but the final in Biot has a little gap that could favor a northern classics sprinter.

Stage 7: Saturday 13 March. Nice – Valdeblore La Colmiane (166.5 km)
It is the queen stage of Paris-Nice, the one who could decide the final winner. Four GPM, two of the second category and two of the first with an uphill finish at 1,500 meters in La Colmiane after 16 kilometers with an average gradient of 6.3%.

Stage 8: Sunday 14 March. Nice – Nice (110.5 km)
It will not be a catwalk but still a stage that can change the general classification. There are five GPM, four of which are second category and one first, the last, the famous Col d’ève) is at 25km from the finish with an average gradient of 8%, but in the final there is another climb, not classified as GPM, the Col de Quatres Chemins, 6km uphill and only 8km from the finish.

How many types of cyclists?? By @cycling_of_the_