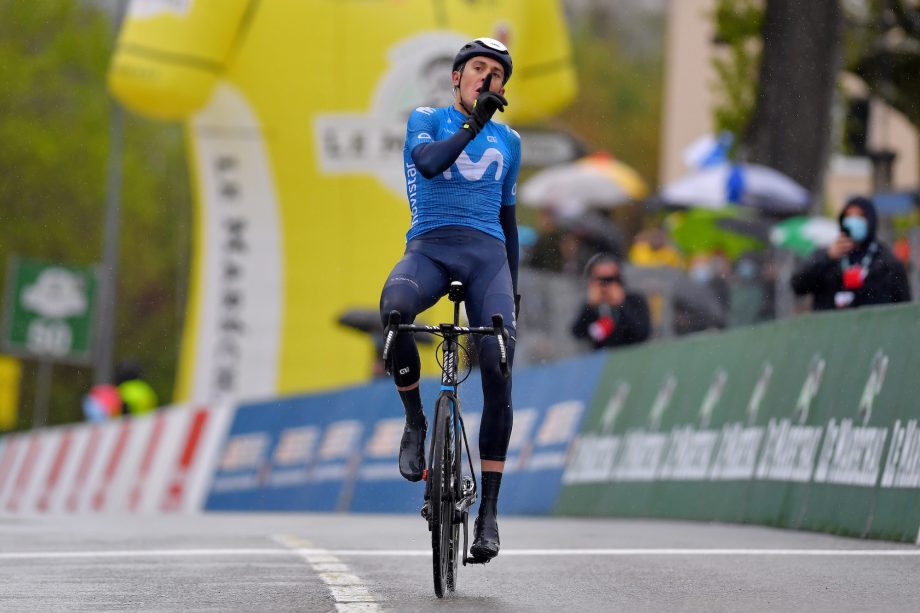 Marc Soler won the third stage of the Tour of Romandie, snatching the leader jersey from Rohan Dennis, victim of a fall during the descend from the penultimate climb. His fifth career victory was complete with a polemical gesture and a finger to his lips to say “shut up”, and this is the third seasonal success for Movistar.

Immediately after the finish line, Soler wanted to dedicate the victory to Jesús Hoyos, the medical historian of Movistar who passed away today.

THE RACE. Most of the race was marked by an early breakaway initially promoted by Kung, Reutimann, Quarterman and Thiery. The attackers were then joined by Jacobs, Goossens, Armée and Bissegger.

The breakaway was kept under control by the men of Ineos Geanadiers and once the group of the best was again compacted on the ascent of Les Granges, Marc Soler launched a solo attack inside the final 10km and held off the peloton as the rain poured in Switzerland.

The fourth stage is scheduled for tomorrow, the 161km Sion-Thyon with an uphill finish at the end of a 20km climb.

It is the ‘queen stage’ of this edition of the Tour de Romandie, with 5 GPM and 4000 meters in elevation gain. In the first 60 kilometres, the race will offer several opportunities for the braves who want to attempt long span attacks. Three GPM will mark these early stages: Chamoson cat3 (2 km, 7.3%, max 9%), Anzère cat1 (14.6 km, 7%, max 11%), Lens cat3 (3.5 km, 6.5%, max 9%). The descent from the latter will be followed by 40 kilometres of flat ground that will bring to the feet of the first of the two final ascents that will certainly provide a clear verdict on the possible the winner of this year Romandie. Both climbs are 1st category: Suen (13.6 km, 6.8%, max 10%) and Thyon 2000 (21 km at 7.6% and 4 kms at 10% plus between -6.5 km and -2.5 km). Some questions arise towards tomorrow weather conditions and the race will certainly be intense before Sunday’s time trial decider.

(All pictures, copyright @ by the author, we use are for editorial and non-commercial usages only)