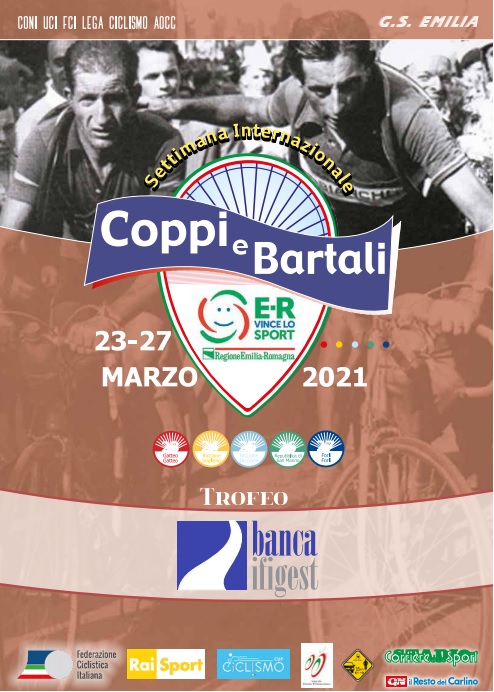 The 2021 edition of the Settimana Internazionale Coppi e Bartali, a cycling race for professionals organised by Adriano Amici GSEMILIA, will start on Tuesday 23 March and will end on Saturday 27. This year the route is particularly interesting and spectacular. There are five stages, the first of which is in turn divided into two semi-stages. Both will be staged in Gatteo, which for some years now has hosted the opening day dedicated to the two legends of Italian cycling. The fourth stage will unfold almost entirely, except for a short stretch within the Republic of San Marino

1st stage (1st half-stage) Tuesday 23March: Gatteo – Gatteo (97.8 Km). The first half-stage takes place on the roads of the Union of Municipalities of the Rubicone (Gatteo, Gambettola, Longiano, San Mauro Pascoli and Savignano sul Rubicone) and in some places crosses the municipalities of Forlì-Cesena and Rimini. The opening fraction is divided into three parts the first which, after the official departure from the Sidermec factory of Pino Buda, leads to Gatteo Mare and then passes for the first time under the finish line of Gatteo from where you reach Gambettola and head towards the 163 meters of altitude of Longiano, where the first GPM is expected. Here begins the second part of the race with the two laps of the classic “Due per bene” circuit of 13.3 km where the other GPM of the day are located. At the end of the two laps, a rapid technical descent with bends and counter-bends brings us back, through Savignano sul Rubicone, to Gatteo, where the last lap of just under 9 km begins on the finish line and will touch the fraction of Fiumicino before returning in via Roma for the epilogue, which often (but not always) sees a sprint in compact ranks.

2nd stage Wednesday 24March: Riccione – Sogliano al Rubicone (163.5 Km). Riccione will host the start of the second leg. The Romagna town therefore once again, proposes itself as a place that winks at cycling and will do so with a stage of 163.5 km destined to leave its mark, with an uphill finish in Sogliano al Rubicone. After a transfer stretch of about 5 km on the city route, the “zero km” is located on Viale Milano, in correspondence with Viale Ceccarini. Leaving Riccione, through a very varied route, devoid of long climbs but dotted with some more or less steep tears, we touch the localities of San Clemente, Coriano, Ospedaletto, to head towards the Rimini hinterland, following an itinerary full of short ups and downs before starting the more continuous climb towards Verucchio (298 m asl). A quick descent towards the valley and then we will see immediately an attack on the challenging climb of Torriana (GPM at km 45.3 at 326 m asl). Another steep descent and a short section of the valley, up to the Ciola / Stradone locality leads to the Cornacchiara climb to get onto the Sogliano circuit road, overcoming the “Cioca” climb for the first time and make a first passage under the finish in Sogliano al Rubicone. From this point, 4 complete laps of the Sogliano circuit will be covered, each of 23.6 km. The circuit then winds its way through the towns of San Martino in Converseto, Borghi, Montalbano, the Rubicone river bridge, the “Cioca” climb and a new passage under the finish line. It is a hilly route that will culminates with the most demanding uphill stretch in the last 3.6 km that will lead to the final finish line.

3rd stage Thursday 25March: Riccione – Riccione (145 Km). The third stage will start and arrive in Riccione, 145 km which will have Monte Carpegna as the toughest climb. The race will immediately point towards the hinterland and after passing through the town of Ospedaletto it will enter the territory of the Republic of San Marino at km 13.7 of the race. Shortly afterwards, the road will begin to climb towards Montegiardino, covering a large part of the climb already the scene of the individual time trial stage in the Giro d’Italia 2019. At the end of this first uphill stretch, the route will leave the Republic of San Marino to enter the territory in the province of Pesaro and Urbino. A descent on a wide and smooth road will lead to Mercatino Conca to start climbing again towards Montealtavelia; facing a very scenic stretch through the hills between the valleys of the Conca and Foglia before descending towards Auditore. The race will then head towards the town of Carpegna. Right from the center of the town, a curve to the left leads to the demanding and famous climb of the “Cippo di Carpegna” (peak at an altitude of 1,377 m asl), so dear to Marco Pantani that he made it the indispensable theatre of his training. 6 km of hard climb with an average gradient of over 10%. After the steep and demanding descent in the first part you will face a short but challenging uphill stretch that will lead you to the center of Pennabilli, and then continue to descend towards the Marecchia valley up to Ponte di Molino Baffoni. From here the long climb will begin which in 9 km will lead to the 1st category GPM of Madonna di Pugliano. After an equally long descent on a wide and smooth road, you go up again towards Montemaggio (515 m asl) to enter the territory of the Republic of San Marino again. Yet another descent to Ponte Rio San Marino and ascent towards Fiorentino where the third GPM of the day will be placed. From Pian della Pieve (15.2 km to the finish line) a series of short ups and downs begins that could favor a coup by a finisseur before the finish in Riccione.

4th stage Friday 26March: San Marino – San Marino (154.8 Km). The penultimate stage, with departure and arrival in the Republic of San Marino, will feature a total of 154 km and almost 4000 meters of altitude difference. The stage is structured on two circuits: the first, to embrace the hills that frame the three fortresses of San Marino, will be covered twice; six will be the laps scheduled for the second circuit, developed closer to the historic center. Starting from Via Impietrata, the first circuit includes a first downhill stretch, then immediately veers uphill towards Chiesanuova (2.7 km at 5.0%); new descent, steep and fast, then one of the few flat sections leads to the start of the second climb (5.2 km at 6.0%). You enter the highway that connects San Marino to Rimini and go along it in a fast and wide descent for about 7 km. Once in Serravalle, a sharp turn to the right leads to attack the third ascent of the circuit, on more tortuous roads than the previous ones: the average gradient of 7.6% over 2.8 km, with some double-digit ramps. A very scenic stretch of slight slope leads you to cross the border for a few kilometers; just enough time for a short and steep descent, before starting the fourth climb, back in San Marino territory. It is 8.9 km (5.6% average gradient) which, through Faetano, will lead to the first passage on the finish line, also valid as a GPM. When you pass again for the second time (another GPM), the km traveled will be 100.2 km, and the altitude difference already exceeded will be about 2400. At this point you enter the final circuit, rather demanding, which develops for 9, 1 km and involves about 240 meters of elevation gain at each lap. Both the altimetry, with frequent alternation between climbs and descents, and the plan, with various curves and counter-curves, will allow very few moments of pause; if that were not enough, the last 2.4 km leading to the finish line, all uphill (6.8% average), will certainly make the final of this stage very selective and spectacular.

5th stage Saturday 27March: Forlì – Forlì (166.2 Km). The grand finale, just like last year, will have the city of Forli as its theatre, with start and finish in Piazza Aurelio Saffi, 166 km in all. After a brief transfer within the city, the race will immediately come to life with the Predappio-Rocca delle Caminate circuit. It is a 22.0 km ring, to be covered 7 times, consisting of a first section of 9 km that follows the provincial road that runs along the valley of the Rabbi river up to Predappio, then a short climbs up to that della Rocca delle Caminate, 3.5 km with a constant gradient between 6% and 7%. At the end of the 7th lap of the circuit, we will return to the centre of Forlì: it is about 7.5 km flat, characterized by long straights up to the very central Corso della Repubblica to reach the finish line in the heart of the city of Forlì in Piazza Aurelio Saffi.

If you need to pave a road, call Remco 📸 Evenep