The Story of Phillippa York 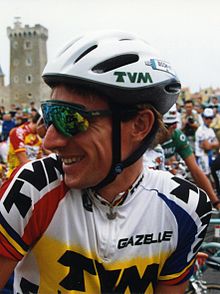 In the 1984 Tour de France, the 25-year-old Robert Millar became the first English speaker to be crowned ‘King of the Mountains.’ Finishing fourth that year, Millar became one of the most feared and respected riders in Europe and was considered by many as one of the best climbers in the world, especially when riding the harsh climates of the Alpes and Pyrenees mountains.

As 1985 went underway, Millar became the leader and star rider of Peugeot, one of the strongest professional French teams and came second in the 1985 and 1986 Tours of Spain and the 1987 Giro d’Italia. After retiring in 1995 with a huge profile, Millar spent a year as a coach for the British Cycling Team. In 2000 Millar’s public life reseeded and reseeded and in the 2002 commonwealth games made one last appearance as Robert Millar.

In 2017, the former cyclist emerged on television as Phillippa York. She is the first ever professional cyclist to go public about her gender transition. Not wanting the world to forget about her former achievements but also wanting to officially close a chapter in her former life, York took a huge leap forward in a sport which still sees a massive disparity between men and women.

As a cyclist, York had a reputation for being uncooperative with journalists, in one instance, York told Jeff Connor, author of Wide Eyed & Legless: Inside the Tour de France to “fuck off.” She became increasingly disconnected with journalists and even with even her teammates, always keeping the world at arm’s length. But nobody could question her shear brilliance as a rider and when she climbed- she absolutely excelled. “I was successful, and people respected that success, but my underlying happiness wasn’t there because I was living a life, I didn’t really want to live even though I enjoyed it,” York explains. Alas, don’t forget that during height of York’s career, conservations about homosexuality was just entering into popular discourse. It would have become extremely difficult if not impossible, to transition during the 80’s.

During a television interview for ITV, York described the feeling of meeting people for the first time, who had known her previously as Robert Millar, as “strange” and “stressful,” having to physically watch someone adapt to Philippa. Explaining that she is only able to do a few interviews at a time before regenerating for further public appearances, just goes to show what a challenging journey this is. But, what York explains is that one shouldn’t forget about her past achievements, but they are accolades that will stay in the past. It’s closing doors and opening others and hopefully we are opening up a door where LGBTQ issues are being raised in the realm of sport.

“[…] That’s what transitioning is-” York says, “it’s moving from this unhappy person who copes to a happier person who doesn’t have to cope.”

We've got an awesome #GCNInspiration shot this week, sent in from neiladams1809 while riding around beautiful coves in Moraira, Spain!

Where is your favourite place to ride?

📸 Submit your #GCNInspiration pics on the GCN app for a chance to be featured on the channel!

🚴Meet the Two Best Cyclists Ever to Have Lived🚴
According to Cycling Ranking,the two best cyclists of all time are:
Eddy Merckx
Sean Kelly
You can learn more about it and these two legends here; https://bit.ly/3JJ87fL
#legends #seankelly #eddymerckx #roadcyclists #sportactive

If you need to pave a road, call Remco 📸 Evenep