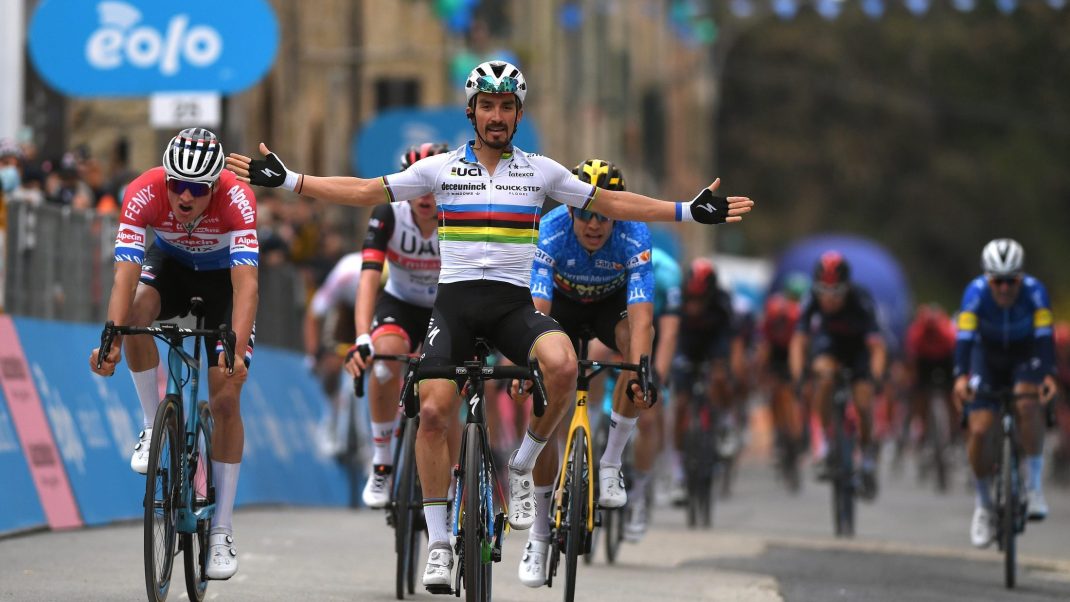 The world champion reverses Strade Bianche’s finishing order and wins for the first time in 2021.

In a thrilling finale, Alaphilippe jumped with 350m to go to come around Deceuninck-Quick-Step teammate João Almeida, who attacked out of a breakaway in the final kilometer.

“I was just focused to keep my position. It was a perfect situation for us,” Alaphilippe said. “I was focused on what was happening behind me. In the end, everybody was on the limit. When I saw João, I went full-gas. This makes me very happy. The team believed in me today, and I am happy to give the team this victory.”

The undulating 202km second stage from Camaiore to Chiusdino set the stage for a rugged finish. Almeida attacked at the red kite from a four-rider breakaway that gelled with about 25km to go, but the GC bunch powered in the closing kilometers to set up the reduced bunch sprint.

Alaphilippe jumped early out of the lead bunch to reel in his Portuguese teammate, and fended off a late-charging van der Poel to reverse the finishing order from Strade Bianche. Van Aert came across third to retain the overall lead.

Thursday’s 202km second stage from Camaiore to Chiusdino rolled southeast away from the Italian coast, with a rollercoaster profile in the second half of the stage. Though there was only one rated mountain — Poggio alla Croce at 168km — the course undulated in the final two hours of racing.

⚠️: The Giro comes to a close today with an individual time trial.