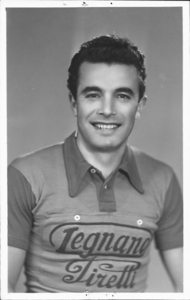 THE BEGINNING – Born in Gualdo Tadino, a small and ancient town famous for its ceramics in the province of Perugia in north-eastern Umbria, Adolfo Leoni (January 13, 1917 – October 19, 1970) was one of the greatest Italian cyclists of all time. One of nine brothers and sisters, he fell into cycling by accident. It was actually his father, Giovanni Leoni, who unknowingly ignited a passion that would eventually carry him through to win championships and titles. On an evening returning from work, his father announced there was an amateur bike race being organised by children of railway workers. Although you had to be 15 years old to enter (Adolfo was 14 at the time), it stuck with him. He lied about his age, entered the race and of course won and immediately impressed the spectators. Adolfo later met Luigi Padronetti, patron of Sportiva Rieti, who became his mentor and taught him about preparation, competition and what it takes to become a sprinter, cementing the beginning of his cycling career.

THE AMATURE CYCLIST – At the age of 17, Adolfo obtained his license for Sportiva Rieti and exploded onto the scene. In his first two seasons, he won an incredible 120 victories including the Tricolore Jersey in the Rome Grand Prix for the Italian Road Cycling Championship. In 1937 at the age of 20, he had an incredible consecutive run of victories in Ferrara, Rieti, Terni and Pescara- all in one week. Sent by the Federciclismo to Paris he won the G.P. of Nations, a major international race. Thanks to these enchanting performances, Adolfo was called up by the amateur national team to participate in the World Amateur Championship in Copenhagen. Although not a clear favourite to win, Adolfo defeated the odds and won the Gold Medal showing his capabilities as a world class sprinter.

THE PRO CYCLIST – After his blinding success the previous year, Leoni tuned pro in 1938 and was contracted by team Bianchi and immediately became a lead rider. Although a sprinter at heart, Leoni proved that he was able to win races with difficult climbs. He became an idol in Italy loved by his fans thanks to his abilities and his good looks and charm. In 1941 he won the Giro del Lazio valid as the professional Italian Championship and then in 1942 he triumphed at the Milan-Sanremo. At the Giro d’Italia he won 17 stages and in the 1949 edition, he kept the Pink Jersey for eight days straight, only to lose it during the legendary Cuneo-Pinerolo, stage 17 of the Giro. Described as one of the most beautiful, intense and epic 254 km worth of climbs, Leoni missed the podium only by a few seconds.  During his professional career, Leoni won 43 races (more than 70 if including various criterium), including a stage at the Tour de France, a Giro del Veneto, the Tre Valli Varesine, the Giro del Piemonte, twice at the Giro dell’Emilia and came second twice at the Tour of Lombardy, once behind Bartali and once behind Coppi. Leoni retired from the sport at the end of the1951 season aged 35.

PERSONAL LIFE and LEGACY – On October 30, 1947, Leoni married Maria Luisa Cioni. At the end of his professional career, he opened a shop for cyclists in Milan and later become his wife’s manager who was an internationally renowned soprano singer. On October 19, 1970, he went to a cardiologist in Massa to undergo a check-up. A heart attack killed him in the waiting room when he was only 53 years old.

Hailed as “cycling’s version of Tyrone Power,” as “the aristocrat of the pedal” as “the beautiful Adolfo,” (Fausto Coppi), as “the brain of the bicycle” (Giuseppe Olmo), Leoni is remembered as a great sportsman and as a handsome gentleman by the newspapers. He was so popular in fact, that a production company wanted to cast him for the role of Rudolph Valentino in his biopic. He turned down the part, claiming he was not interested in anything but cycling.  During his career, Leoni raced against some of cycling’s greats like Coppi, Bartali and Magni and during the Second World War most cycling races were cancelled. If it wasn’t for these two factors, Leoni would have gone on to win more championships and probably would have been an international superstar.

Gualdo Tadino and Rieti, two towns where he lived most of his life, were extremely important to him. Still to this day, Leoni remains a significant part of the heritage for everyone at Gualdo Tadino and for the many cycling enthusiasts who populate the area.

GUALDO TADINO – A small and ancient town 535 metres above sea level in north-eastern Umbria, this dainty and picturesque town is surrounded in an extraordinary landscape.

A place which traces its roots back to the Romans, Gualdo Tadino is decorated with historic buildings such as the Rocca Flea fortress which remains a superb example of military architecture. Most famous for its production of artistic majolica with gold and ruby metallic reflections which is made according to ancient traditions.