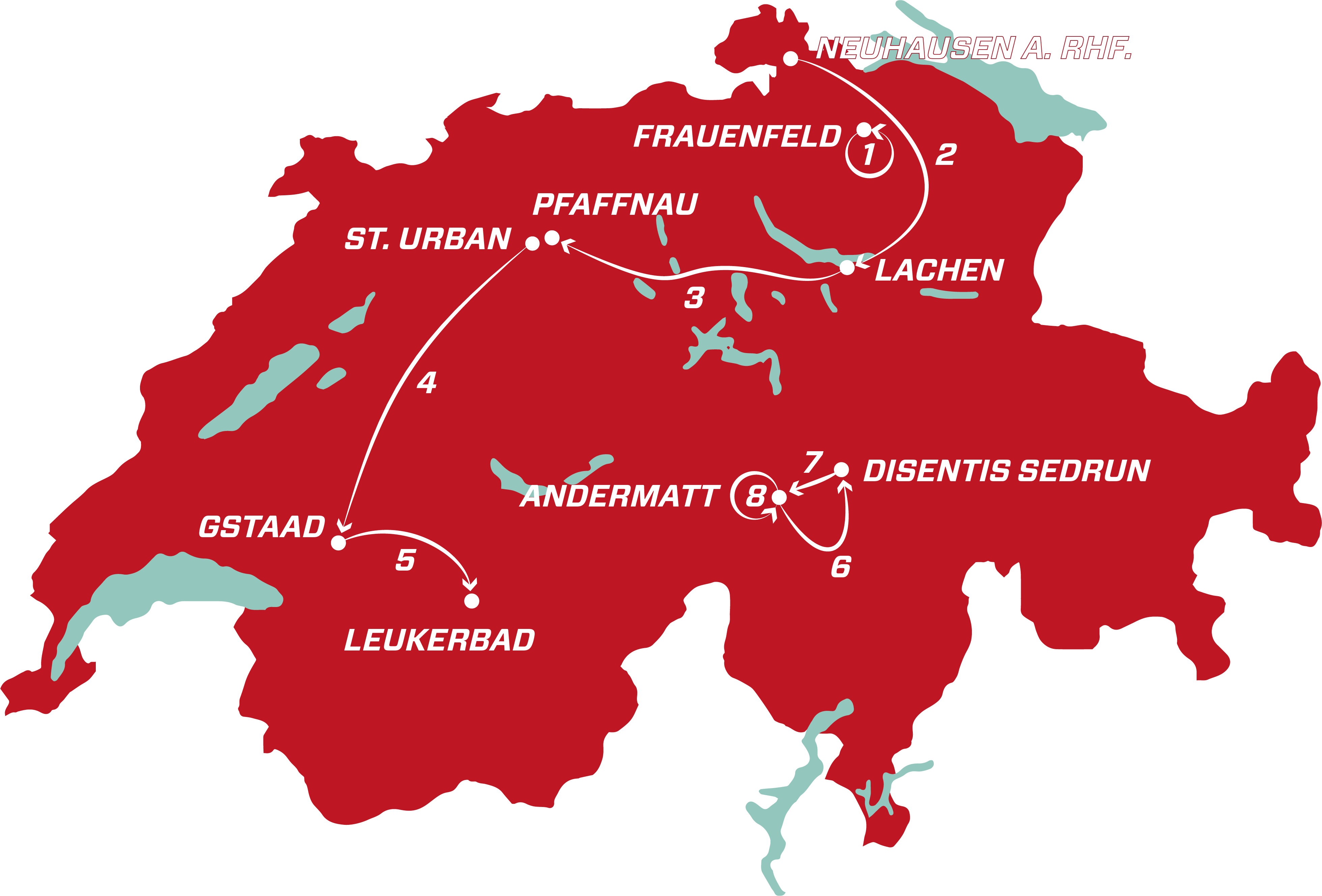 The 2021 Tour of Switzerland will kick off with an individual time trial (ITT). The riders will tackle 10.9 kilometers around the town of Frauenfeld in the Canton of Thurgau, in which the contenders will be able to dig the first gaps. It is an ITT for specialists with straight flat roads and only a few bends but the first 5 km, that lead to the intermediate, are particularly tortuous, while it will be easier to make a difference later, especially in the last 3500 meters, formed by two long straights. Therefore, the parcours will please the specialists. Tomorrow favourites are: Rohan Dennis, Stefan Bissegger and Stefan Küng. The fastest one will also be able to wear the first jersey as the race leader. The first runner will start at 14:17, while the last one at 17:06.

Mathieu van der Poel returns to road racing with a victory on stage two of the Tour de Suisse 2021. The Dutch champion attacked out of the group of main favourites with only Max Schachmann able to follow. Full article by cyclingweekly.com and full results from procyclingstats.com

The group immediately encounters the first significant hilly terrain. The route presents continuous undulations in the first 100 km and then takes two climbs of medium difficulty: Ghöch, 8.3 km at 4.7%, divided into several sections of which one of 1km at 12.1%; Oberricken, 7.8 km at 5.1%, with 1 km at 9.3% in the middle of the climb. However, the race should be decided in the final, after these two climbs have presumably created a first skimming in the peloton. At 15km from the finish, an uncategorised climb of over 1km with important gradients (8/9% on average), introduce immediately the last GPM, Litschstrasse, 2.4 km at 8.3%, with long stretches (around 1.5km) over 10%. The summit is only 7 km away from the finish line with the last 4kms on flat terrain. A great opportunity to try and attack, favoured by a technical descent and a very tortuous last km. The overall altitude gain is close to 2500 meters and the rain is expected to fall during most of the day.

The third stage, 185 km from Lachen to Pfaffnau, is also quite hilly. After an initial uphill part, the central section will be simpler, with only a few short tears (including the Bottenwilerstrasse GPM, 2.4 km at 6.5%), to be tackled before passing the finish line for the first time, at 46 km from the conclusion. From here, the final circuit will begin including the ascent of Ohmstalerstrasse (3.4 km at 6.1%), located 24 km from the finish, which will be followed by an irregular descent and a final, slightly uphill stretch. A day, which could reward everybody in the peloton, since it is open to all solutions: the success of a breakaway, a sprint from a small group or the action of a finisseur.

Stefan Bissegger takes breakaway success on stage four of Tour de Suisse 2021 as Van der Poel keeps yellow. The break looked to be coming back before the peloton completely sat up on the final climb. Full article by  TIM BONVILLE-GINN © cyclingweekly.com and full results procyclingstats.com

The St. Urban – Gstaad (171 km) is the first stage of serious approach to the mountains, with the first pass to climb, despite a mostly flat terrain for 150 km. Things change at 20 km from the finish, where there will be the ascent of Saanenmöser, a climb of 7.5 km that is quite pedalable (average gradient 4.4%) but from the top there are just 10 km from the finish line, most of them descending towards the arrival. Whoever transits to the top with a handful of seconds ahead will have a great chance to win the stage.

The fifth stage is the first and only arrival at altitude in this edition of the race and it is the first decisive stage for the final standing of this Tour de Suisse. After the departure from Gstaad, the riders will immediately encounter the ascent of the Col du Pillon (6.8 km at 5.1%), then, after a long descent, there will be more than 100 kilometers completely flat (apart from the short stretch of Varenstrasse, 2.4 km at 5.4%). This brings us to the last 30 kilometers of the race, where we will tackle the demanding ascent of Erschmatt (8 km at 8.4%), with constant gradients at 9/10% in the central part. The climb will certainly select the group in view of the final climb towards Leukerbad. The summit is less than 20 km from the finish line and after 7 km of descent and 3 km slightly uphill, the last 8 km return to be more demanding, albeit without any proibitive gradients (5.6% on average). The ground for attacking is there.

Also on the following day there will be mountains with the Andermatt – Disentis / Sedrun (130km), a fraction that has had to undergo changes compared to what was originally announced due to the presence of snow on some Alpine passes. The stage will be short but intense with the climbs of the Gotthard and the Lukmanier. The start will go uphill immediately towards the Gotthard Pass (2106m above sea level, 8.5 km at 7.2%), and it is almost certain that a breakaway will have easily success. From the summit, a long descent will take the peloton almost to the foot of the next ascent. After a short flat stretch, in fact, the road will climb up to Olivone, where the GPM of the Lucomagno Pass will officially begin, 18 km long and with an average gradient of 5.6%. The subsequent descent is pedalable and free of technical sections. The last eleven kms will have a classified GPM, the climb of Via Lucmagn (1200 m at 5.1%), followed by a slight slope that will bring riders to the finish line.

A key stage for the final result with a demanding 23.2 km time-trial from Disentis/Sedrun to Andermatt. A time-trial divided practically halfway between uphill and downhill to cross the Oberalppass. After a couple of kms from the start, the riders begin to climb towards the challenging Oberalpass (2046 meters of altitude, 9.5 km at 6.5%, with the gradient at 8/9% in the last 4km), where the only intermediate time measurement will be placed. From the summit, and after flat couple of kms, the descent will begin, it is not technical, but has several hairpin bends that ends close to the finish line.

The last stage will start and finish in Andermatt. In the first 50 kms 2 climbs, the Oberalppass and Lukmanier both from the opposite sides compared to the previous two days: the first is 10.8 km at 5.5%, the second is 16.5 km at 5.3%. The Lukmanier Pass will be followed by a long descent to the valley, where the road will then begin to climb for about forty kms, the last 11.9 km will bring to the Gotthard Pass (average gradient of 7.4% with long stretches at 8%, max 12%). The Gotthard will be faced from the ancient road of Val Tremola, a road of almost 13 kilometers with the final 5.3 km paved with cobblestones and several hairpin bends its up to 12% gradients. The summit is only 15 km away and the descent ends 5 km from the finish line.

Israel-Premier Tech ‘Field of Dreams’ kit for Tour de France aims to raise awareness of a fundraising campaign to build a bike center in Rwanda.
https://bit.ly/3u5PWua