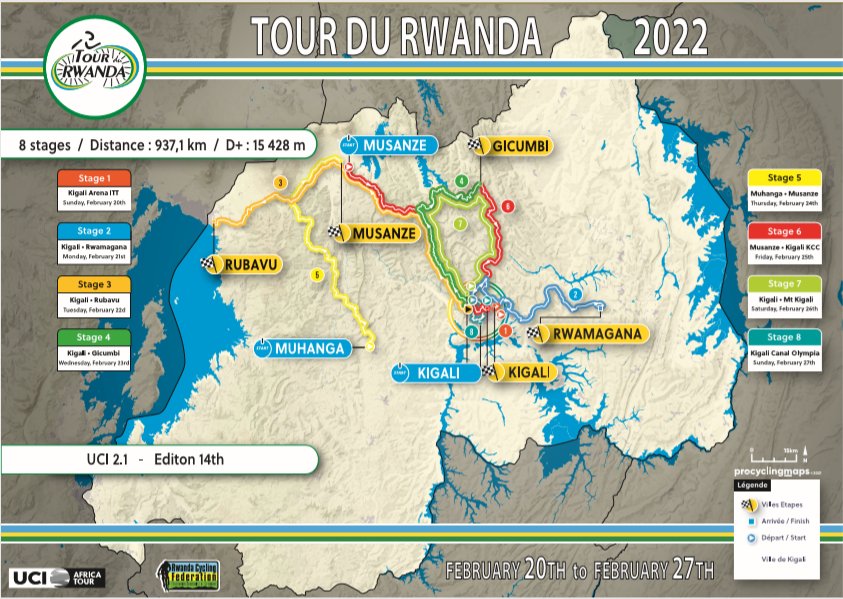 The Tour du Rwanda, the only pro stage race in Africa this year, was won by the Eritrean of Drone Hopper-Androni. The race, which took place between 21 and 27 February, saw the triumph of Natnael Tesfatsion, bringing success to the Italian team Androni-Drone Hopper, after an exciting battle on each stage of the Rwandan week and a revolutionised the general classification from day to day, with five different riders wearing the yellow leader’s jersey. Tesfatsion, who won the race in 2020, was the most consistent of the favourites for victory. Most of the other big names in the race had at least a bad day compromising their final results.

29 Jan – The Eritrean national team, which should have been at the start of the Tour of Rwanda to be held from 20 to 27 February, has been excluded by the organisers. The reason for this unexpected exclusion is said to be the application of the new UCI protocol and Rwandan anti-covid rules, which are stricter than those of the UCI protocol and are also applied in the race. In fact, only vaccinated people can enter Rwanda and Eritrea is the only country on the African continent that has not yet started vaccinating its citizens. The announcement made by the Tour of Rwanda organisation is a blow to the Eritrean team, which is one of Africa’s strongest team and winner of 2019 and 2020 editions with Merhawi Kudus and Natnael Tesfatsion.

February is the month that opens the season and the Tour du Rwanda 2022 is one of the main events on the international calendar. A race that, after the assignment of the 2025 World Championships to Rwanda, certainly grows in interest and the expectations on the organization. The eight stages are confirmed, with the start on 20 February 2022 with the time trial in the Kigali Arena. Also this year the race will take place almost all around Kigali, the capital of Rwanda, but the route will be much more challenging then last year and will leave little room for sprinters.

Alexandre Geniez took the prologue of the Tour du Rwanda 2022. The pouring rain did not spare any of the riders as they set off for their test against the clock, the TotalEnergies rider stopped the clock at 4’41” at the end of the four kilometres in the programme today. Jhonatan Restrepo (DroneHopper-Androni), who had been in the lead for a long time, and Sandy Dujardin (TotalEnergies) were also on the podium on this first day in the country that will host the World Championships in 2025, second and third, respectively 6″ and 7″ behind the winner of the day. Geniez is obviously also the first leader of the race. Full Result here

Sandy Dujardin won the first stage of the Tour du Rwanda 2022. The TotalEnergies rider sprinted to victory after the peloton had caught up with the attackers on the final lap of the short finishing circuit. After a tight head-to-head, the Frenchman sprinted past his compatriot Axel Laurence (B&B Hotels – KTM), while Jhonatan Restrepo (Drone Hopper – Androni) completed the podium. Alexandre Geniez (TotalEnergies) remains in the leader’s jersey thanks to his success in the opening time trial, maintaining an advantage of six seconds over Restrepo and seven over Dujardin. Full results here

The second stage of the Tour of Rwanda, which took place on Tuesday between Kigali and Rubavu, was won by Colombian rider Jonathan Restrepo, who took the yellow jersey of overall leader at the expense of Alexandre Geniez (Team TotalEnergies). At the end of a very animated race, which saw a breakaway battle for the win, the member of the Drone Hopper-Androni Giocattoli team sprinted against a group of seven riders to win his sixth stage victory in the event. Already second on Monday behind Sandy Dujardin (Team TotalEnergies), the Breton rider Axel Laurance (B&B Hotels-KTM) has to be satisfied with the runner-up position on this second stage, the podium being completed by the Spaniard Angel Madrazo (Burgos BH). Full results here

Main took a solo victory with a three-kilometre attack to the finish in Gicumbi on what was the first uphill finish of this edition. A group of 15 riders settled behind him. An early breakaway was promoted by Dujardin, Goldstein, Niyonkuru, Rolland, McGill, S. Mugisha and Nielsen. But all changed on the final 4km climb, with ProTouch’s Kent Main of South Africa taking the win. Frenchman Axel Laurance of B&B Hotels is the new race leader and took the yellow jersey from Jhonathan Restrepo. Full results here

The fifth stage of the Tour du Rwanda – 129,9 km from Muhanga to Musanze with 5 gpm to face – has revolutionized the general classification thanks to the attack of Pierre Roland (B&B Hotels) and Alexandre Geniez (TotalEnergies). After an initial attempt by Merchan, Geniez, Teugels, Boileau and Nsengimana, the two Frenchmen took the reins of the race and imposed their own law. In the final the two attacked several times and in the end it was Alexandre Geniez, who had already won the opening time trial, who took the victory. The leader’s jersey of the general classification is on the shoulders of Angel Madrazo with “Natalino” Tesfazion of Drone Hopper Androni second with the same time and the Ukrainian Budiak at six seconds. Full results here

Anatoliy Budyak won the sixth stage of the Tour du Rwanda, the 152 km Musanze-Kigali, which today featured four 4 gpm and above all the dreaded Kigali wall, 450 metres of cobblestones with an average gradient of 11.8% and a maximum of 22%. Beautiful images of the passage of the riders between two real wings of the crowd. The Ukrainian of Terengganu Polygon, anxious about the fate of his country under siege in these hours, has found the strength to win ahead of the Eritrean Tesfazion of Drone Hopper Androni that thanks to his second place jumps at the head of the general classification. Complete the podium of the day the home rider Manizabayo, third place. Fourth place to Restrepo. Former leader Angel Madrazo (Burgos-BH) came tenth across the line in a small group 16″ behind the leading duo. Former yellow jersey holder Axel Laurance (B&B Hotels) retired due to knee problems. Full results here

Alan Boileau won the seventh stage of the Tour du Rwanda 2022. The rider from B&B Hotles – KTM was able to catch-up Omer Goldstein (Israel – PerimerTech) in the last kilometre and overtake him at the finish line. The pair were able to join a breakaway which formed after numerous attempts and then fight for the stage win on the final climb. Natanael Tesfatsion (Drone Hopper – Androni Giocattoli) kept the yellow jersey of the leader of the general classification.

The start of the race was characterised by several attempts until a ten-man breakaway succeeded. After 67 km everything was once again reshuffled and a new leading group formed with Pierre Rolland (B&B Hotels – KTM), the 18 year old Samuel Niyonkuru (Rwanda), Elias Van Breussegen 8-(Tarteletto-Isorex), Cole Kessler (Israel – PerimerTech), Paul Ourselin (TotalEnergies), Didier Marchan (Drone Hopper-Androni Giocattoli), Alan Boileau (B&B Hotels – KTM), Noah Graingan ((Wildlife Generation Pro Cycling), Omer Goldstein (Israel-PremierTech) and André Drege (Team Coop). The attackers proceeded at a good pace making impossible for the peloton to catch them up. As the climb towards the Gako climb began, Rolland began to force his way to the front, but the ten attackers were still all together. With a few kilometres to go Dregge, Goldstein and Van Breussegem attacked gaining a small margin. The Israel rider managed to extend his effort and entered the last five kilometres of the race with a 20-second lead over a trio formed by Ourselin, Marchand and Boileau. It was Boileau who, on the final climb, managed to pull ahead of the Israeli and sprint all alone towards the finish line. Full results here

The final stage is very short but not at all trivial, featuring a circuit with three passes over the Mur de Kigali and the final uphill finish at “Canal Olympia”, also near the Rwandan capital. Needless to say, the 75 kilometres were tackled at full speed from the outset. A six-man attempt to break clear took off while in the peloton it was Drone Hopper who ensured the escapees’ margin did not grow too large. The trio of TotalEnergies riders Geniez and Dujardin and Rwandan rider Moise Mugisha (ProTouch) were in with a chance of victory on the Mur de Kigali. The French pair would have the means to win the stage but both Geniez and Dujardin have already won stages in this Tour du Rwanda and chose in a beautiful gesture of great sportsmanship to leave the victory to local idol Mugisha, arriving on parade amidst the cheering crowd. Behind, however, Tesfatsion administered without too much trouble and won the race over Budyak and Ewart. Full results here

Elise Chabbey to put climbing strength to test at the Giro Donne https://trib.al/lK0b0mu