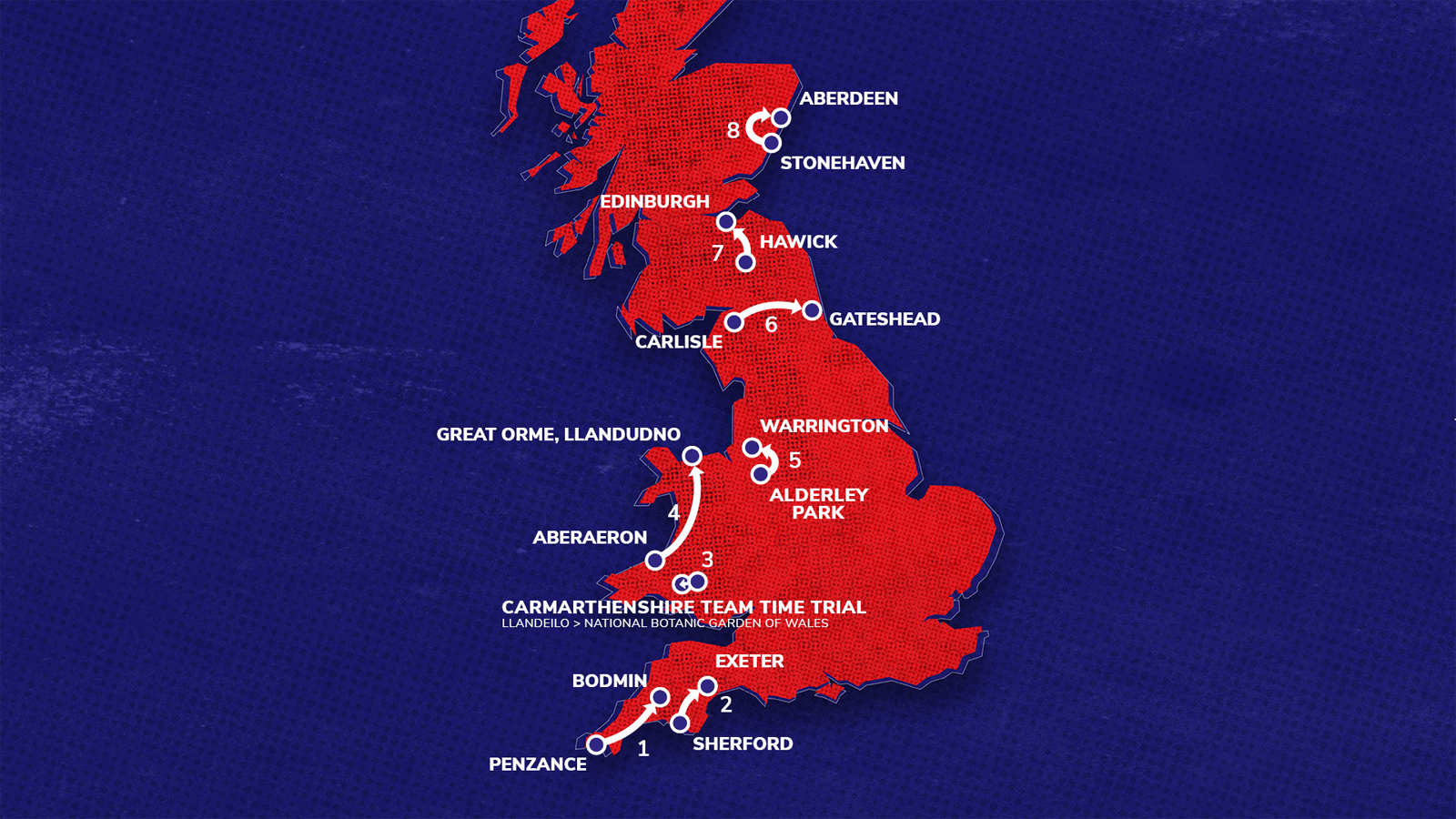 in progress (Image credit: Sweetspot ) © The Tour of Britain

Rescheduled to 2021 owing to the COVID-19 pandemic, the organisers of the Tour of Britain have unveiled details of the 2021 route. The 17th edition of the UK’s most prestigious stage race (Sunday 5-12 September) will have eight stages including a team time trial in Wales and a hill-top finish on Great Orme. The eight-day event, which will cover 1,320 kilometres (820 miles) of racing starting in Cornwall, up through Wales, before finishing in Scotland.

From Penzance Promenade the route will head across the Penwith Peninsula to St Just, hugging the coast to St Ives, Hayle and Gwithian before turning inland to Camborne, Pool and Redruth. The route passes the beaches of Falmouth and Pendennis Point offering the peloton spectacular views across Falmouth Bay before heading towards Penryn and on to the city of Truro. The impressive Truro Cathedral will be clearly visible from the route through the city, which then crosses back to the north coast to take in Newquay and Newquay Bay. Having passed through the centre of St Austell, the race enters its run in to Bodmin, with the inaugural Cornwall stage finishing outside the historic Bodmin Keep in the town, with a 700-metre uphill drag to the line with an initial sector at 13% and an average of 4%.

The route will feature three intermediate sprints, the first of which will come at Torcross as the route crosses the road along the narrow shingle bar that separates Slapton Ley from the sea, with the remaining Sprints in Kingsbridge and Tavistock. Three ŠKODA King of the Mountains climbs will also feature, the first on the coast at Strete at the end of a two kilometre climb from Blackpool Sands. The second and third ŠKODA King of the Mountains climbs both come in the Dartmoor National Park, the first the 8.7 kilometre climb of Rundlestone above Tavistock, which has been used by the Tour of Britain twice before (2010 and 2012). The final categorised climb will be between Postbridge and the famous Warren House Inn, one of the most famous locations on Dartmoor and at 434m (1,425ft) above sea level the highest inn in southern England, where the pub’s fire has famously been burning since 1845.

The Queen stage of the 2021 Tour of Britain, stage four will start by the sea in the harbour town of Aberaeron and culminate with a dramatic finish atop the Great Orme in Llandudno.

The 215-kilometre route will take the race to parts of mid-Wales for the first time in modern Tour history, including Aberystwyth, Borth and Barmouth.

A tough ending to the stage sees the race heading through the Snowdonia National Park and a ŠKODA King of the Mountains ascent of the Great Orme’s Marine Drive toll road before tackling the 1.9km, 9.8% average climb that runs parallel to the famous tramway up to the finish.

Stage five will get underway from Alderley Park from outside Glasshouse, a haven for innovative, hi-tech companies, offering a range of contemporary office space, taking in a route through the grounds. The route will pass famous Cheshire landmarks such as the 18th Century neoclassical Capesthorne Hall, Jodrell Bank – home to the iconic Grade I listed Lovell Telescope – and through the towns of Holmes Chapel and Congleton, the latter of which hosts the first intermediate sprint. A trio of ŠKODA King of the Mountains climbs follow skirting below the famous skyline of Bosley Cloud and into the Cheshire Peak District, with the main climb at Bottom-of-the-Oven, a 1.7km ascent (with an average gradient of 6.9%) to just shy of the famous Cat and Fiddle. Macclesfied, Rainow, and Adlington will all welcome the race before a second intermediate sprint at Wilmslow. The route then heads through the town of Alderley Edge and the climb of the same name and on through Chelford, Knutsford and High Legh before entering Warrington via Appleton.

Stage profile No yet available

Carlisle and Gateshead will return to the Tour of Britain in 2021 to play host to stage six on Friday 10 September. As previously announced, Cumbria will welcome the race for a third consecutive year when it hosts the start of this stage, marking its 11th appearance in the UK’s biggest cycling event (only London has welcomed the Tour of Britain on more occasions). This will also be Carlisle’s fifth appearance in the UK’s biggest cycle race, all of which have been as a start location. The route will head through the Pennines, including a SKODA King of the Mountains climb at Hartside, before Gateshead plays host to its first stage finish since the 2009 Tour of Britain. In what promises to be a spectacular finale, stage six will culminate outside Sir Antony Gormley’s iconic Angel of the North sculpture.

Hawick and Edinburgh will play host to stage seven of the 2021 Tour of Britain on Saturday 11 September, as the race culminates with two full stages in Scotland for the first time ever. While the Scottish Borders is no stranger to the race, Hawick will make its debut as a host venue in September, joining Jedburgh, Peebles and Kelso in welcoming the UK’s most prestigious cycle race to town. The historic city of Edinburgh will then host its first stage finish of the modern Tour of Britain, having previously welcomed the race for stage starts in 2015 and 2017, the latter as part of a Scottish Grand Départ. Holyrood Park will provide the backdrop to what promises to be a truly unforgettable finale.

Aberdeen and Aberdeenshire will host the final stage of the 2021 Tour of Britain on Sunday 12 September, marking the furthest north the race has ever visited. The Aberdeenshire coastal town of Stonehaven will play host to the stage start, with the route also featuring a much-anticipated ascent of the famed Cairn o’Mount climb in the opening kilometres. This year’s overall winner will be crowned in Aberdeen’s historic city centre after a scenic and challenging route. Building on the success of the Tour Series, which has taken place in Aberdeen City since 2017, the UK’s biggest and longest-running international cycle race is also planned to host the following year’s Grand Départ in the region.

Junior men, U23 women and elite men take on the Hoogerheide course on the final day of racing for rainbows