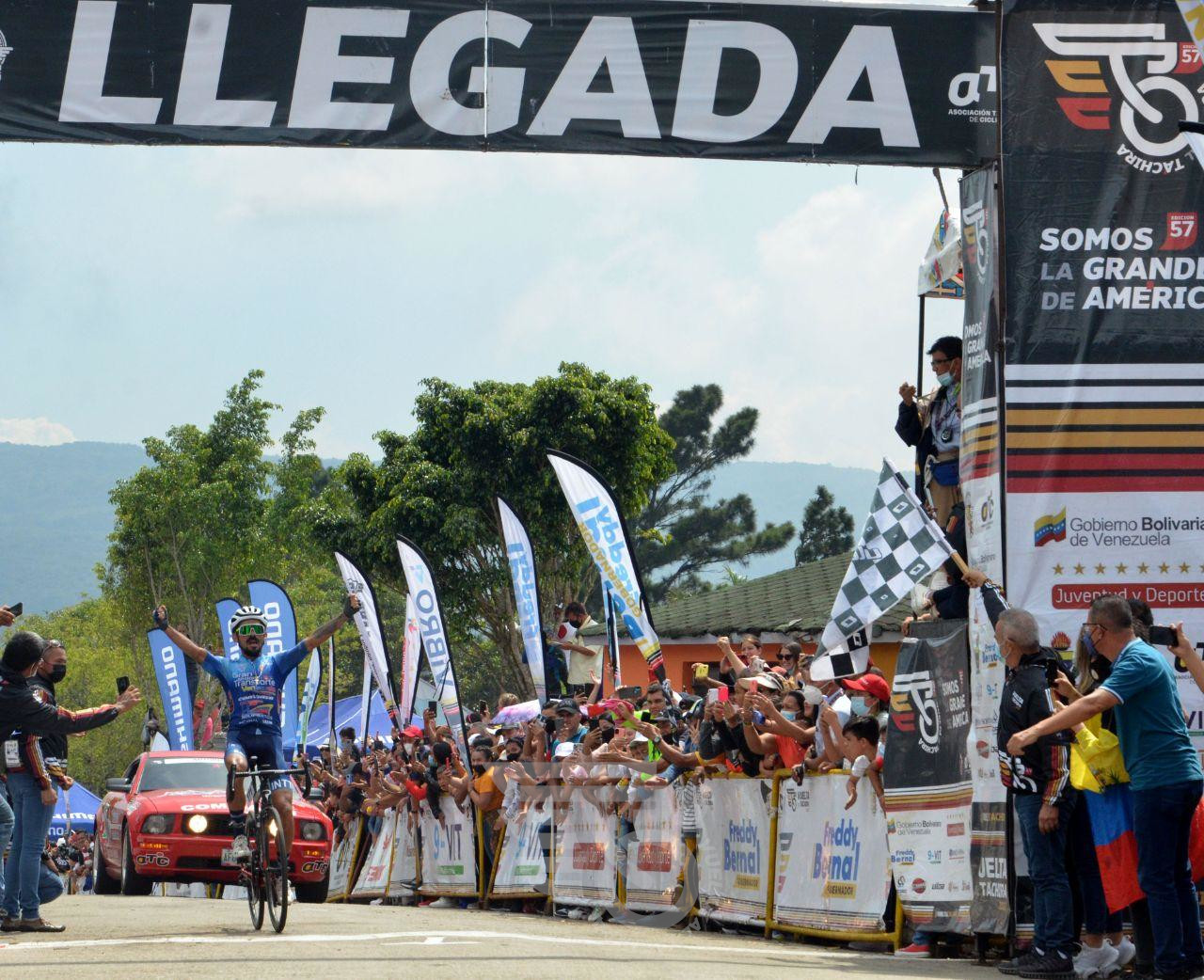 We didn’t need to change the title. After one year, Venezuelan Josè Alarcon strikes again and again on the seventh mountain stage and again arriving at Cerro El Cristo Reya of the Vuelta al Táchira. Second place for home rider Roniel Campos who retains the overall leader’s jersey consolidating his lead as leader of the Vuelta al Táchira-2022. Campos is now close to secure his third title in Venezuela’s biggest cycling event. The winner of the penultimate stage, José Alarcón (Gran Misión Transporte team) won the seventh stage, a 117-kilometre ride between Ureña and Cerro El Cristo, Campos (Deportivo Táchira) took second place after crossing the finish line 1 minute and 39 seconds behind the winner, while Eduin Becerra (Ángeles Hernández-Orgullo Andino Foundation) was third, 1 minute and 41 seconds behind. For the full results here

José Alarcón, the leader of Deportivo Táchira, won the seventh mountain stage arriving at Cerro El Cristo Reya of the Vuelta al Táchira, ahead of his teammate Galviz and Osio. The young Colombian Umba of Androni Sidermec finished in fourth place.

Alarcón preceded by 34 ″ ahead of his teammate Carlos Galviz, protagonist of the long escape with yesterday’s winner Anderson Paredes and Brayan Sanchez. Alarcón waited for the finish to make his move. He went to pick up Galviz and then detached from him and went to close the gap alone with his arms raised. At 47 ″ came the Colombian Danny Osorio, followed at 51 ″ by the young Santiago Umba (Androni), an 18-year-old Colombian who judging by his performance, already seems to be candidate for Gianni Savio’s next great discovery.

As for yesterday, the first two of the general classification controlled each other: Oscar Sevilla finished fifth at 59 ″ with Manuel Medina and Roniel Campos with the same time. Oscar Sevilla tried all he could against Roniel Campos but failed to turn in his favour the situation on the general standings. With just one stage from the conclusion of this Vuelta al Táchira the leader is always Roniel Campos with 2’31 “on Oscar Sevilla, Danny Osorio consolidated his third place at 5’32”, while Santiago Umba is fourth and first of the youngsters at 7’35 “with teammate Daniel Muñoz fifth at 10’41”.

For the full results, stage 8 race profile and more details on Alarcon follow the below links: