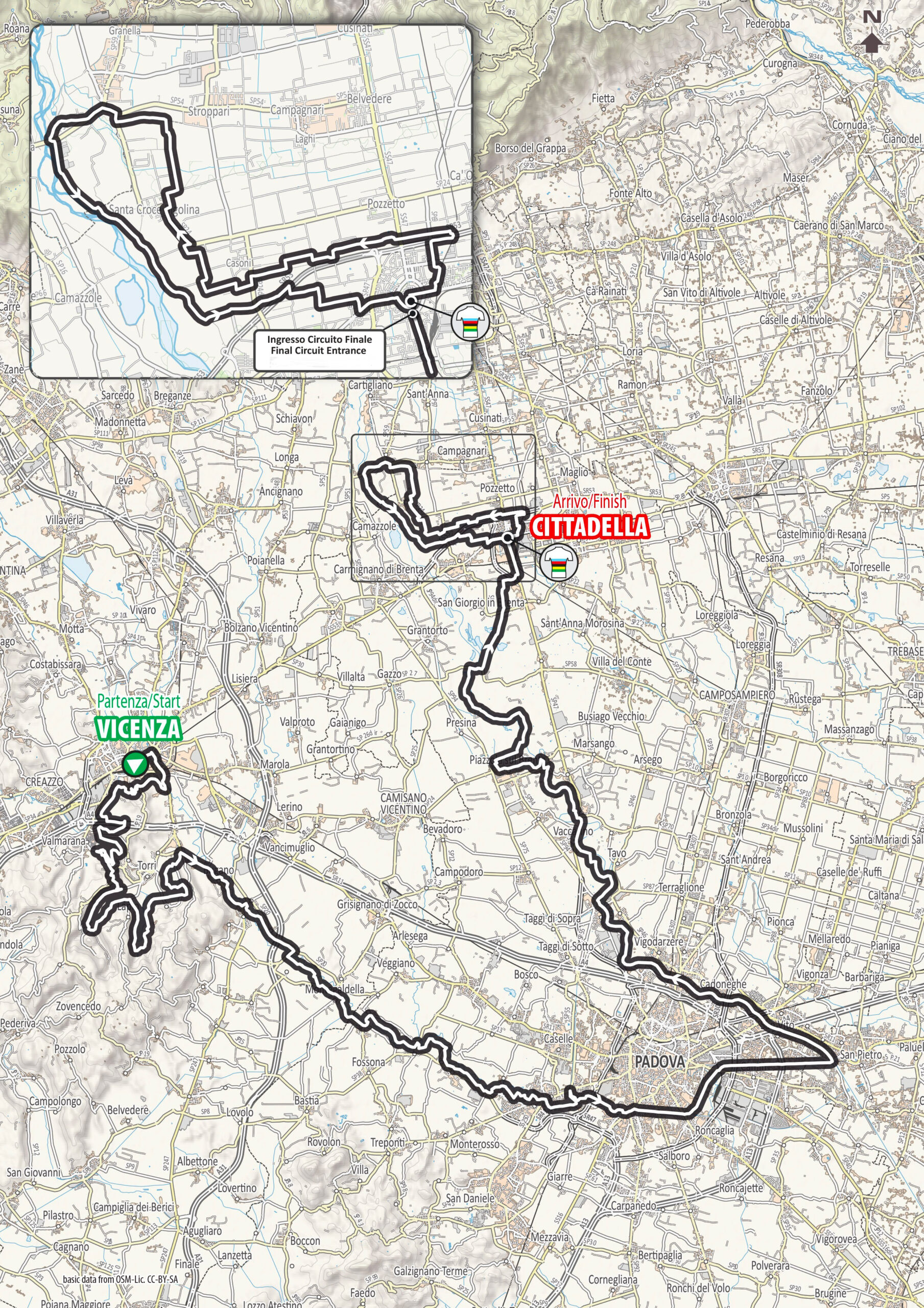 (credit: ppsportevent.com) All pictures and articles, copyright © by the author, we use, are for editorial and non-commercial usages only

In the opening technical section, the peloton fractured into several groups. With 179 km still to ride, Miguel-Ángel López (Colombia) attacked alone out of the lead group. 4 km later, Magnus Cort (Denmark) broke across to him. Presently, Samuele Zoccarato (Italy) and Beers (South Africa) bridged across to them, forming a leading group of four.

As the race evolved, they were absorbed by the peloton, and, with 154 km to go, Daniel Oss (Italy) attacked, and was quickly joined by Gianni Vermeersch (Belgium).

With 65 km to go, their advantage reached its maximum of 5’35”. With 56 km to go, the chase group began to show signs of impatience and, at the first passage of the finish line, with 54 km to go, Oss and Vermeersch led by 4’40”.

Avermaet (Belgium) launched the chase in earnest. With 8.9 km to go, they trailed the two leaders by 2’00” exactly.

With 6 km to go, Gianni Vermeersch attacked and dropped Daniel Oss. With 5 km to go, Vermeersch led Oss by x seconds. The chasing group was at 2’12”.

Gianni Vermeersch (Belgium): I think we attacked under a bridge where we had some single track. Daniel attacked, the guys at the front hesitated, and I went across to close the gap. For a moment 6 guys tried to come back but they never managed to get on the wheels. At that point I thought, “It’s going to be a long day.”

Daniel Oss (Italy): It was just after a couple of attacks, and some tricky corners where, if you gain 1m, the tenth guy is suddenly 100m behind, and, if you push on, you put everyone under stress. We rode together for 154 km.

Gianni Vermeersch (Belgium): We were asking the motorbike for the time gaps . They replied in Italian, so I kept asking Daniel to translate. We rode hard, and I knew that if we didn’t break ourselves, we’d be OK. At the start of the final lap we led by 4 minutes. You can’t close 4 minutes in 27 km.

Daniel Oss (Italy): We worked hard together. We always cooperated. On the final lap it was hard for me to follow gianni. It was technical, which made it hard for me. I started to have cramp and he was simply stronger.

Gianni Vermeersch (Belgium): The last single track was perfect for me. It was a little bit like cyclocross. The last time gap was like 2 mins, so I wanted to grow it. When we came out of the single track, I had a gap on Daniel and I continued to the finish. It’s crazy. I never thought I was going to be a world champion. I’m not a bad rider, but in cyclocross I have always raced against Wout Van Aert and Mathieu an der Poel, so it’s almost impossible to become world champion there, and on the road, it’s hard just to get in the Belgian selection.

So to win the first gravel world title is special. Gravel is going to be something for the future, although I’m not going to become a full-time gravel racer. I’ll try to get some more achievements on the road. But I will wear the jersey on Friday in the Serenissima Gravel.

Mathieu van der Poel (Netherlands): I’m happy for my teammate Gianni Vermeersch. It was pretty obvious when they got away that no one wanted to chase them and they took five minutes that no one was going to catch them. I can’t be disappointed with third place. I think it was a success how they organised these championships. Gravel is really hard as well, like a combination of toad and cyclocross, so I think it can be nice in the future. You can get the same position on the bike as on the road, so it is easier to fit into your schedule. We have the world champion on the team now so he is interested too. It’s new and exciting and fun, and I will race in Friday’s Serenissima Gravel.

Along the 140 kilometres of the course that connecting Vicenza to Cittadella, the Frenchwomen was always in full control and in the final sprint she prevailed over the Swiss biker Sina Frei, the silver medallist in the cross country at the Beijing Olympics. Distanced by a few seconds, the bronze medal was won by Chiara Teocchi (Italy) and Jade Treffeisen (Germany). Barbara Guarischi was the best of the chasers, taking fifth place.

About forty athletes from 16 nations lined up in Vicenza. From the start Ferrand-Prevot imposed an impressive pace and at around minus 50km Pauline Ferrand-Prevot, Sina Frei, Chiara Teocchi, Jade Treffeisen and the American Lauren Stephens, had a lead of one minute over the chasers. The American was then dropped, leaving four out front, to play for three medals. In the grassy ditch around the walls of Cittadella, Treffeisen lost ground, the last ramp was also fatal for Teocchi and so the race for the rainbow jersey became a two-women challenge. The sprint was launched by Frei but Ferrand-Prévot comfortably beat off the challenge of Swiss mountain biker.

From 8 to 16 October, the Veneto region will host an unprecedented concentration of top-level cycling events, which was presented at Palazzo Balbi, Venice, in the seat of the Regional Council. The first weekend will be entirely dedicated to the first edition of the Gravel World Championship: on 8 and 9 October, starting from Vicenza and arriving in Cittadella, the rainbow jerseys of the new speciality will be awarded. An absolute first that has already secured the encore for 2023, assigned by the UCI to the Veneto Region during the congress held last week in Australia.

The start list of the Gravel World Championships will be lit up by Peter Sagan, who have already been announced. “We will soon make other top names official,” Pozzato anticipated. “I hope that Mathieu Van der Poel will be among them. I’m confident, we’re working on it, meanwhile there are already about 400 riders who have signed up” [in the various categories].

After the first pass, professional riders must complete two more 25 km laps for a total distance of 194 km with 800 m of elevation gain.

The race starts in Vicenza and finishes in nearby Cittadella. Riders have 2 minor hills in the first twenty kilometres leaving the city, but the majority of the course follows the Bacchiglione river until Padua and then the Brenta river to Cittadella where the riders cross the finish line for a direct finish. Total distance is 140 km with 700m of elevation.

The fast-growing sport of gravel racing breaks new ground in October with the first ever UCI Gravel World Championships, under the aegis of the Union Cycliste Internationale (UCI) and organised by PP Sport Events, in collaboration with the Municipality of Vicenza and the Municipality of Cittadella in Italy’s Veneto region. Races will take place on the weekend of 8 and 9 October 2022.

The first rainbow jerseys in the discipline will be awarded at the end of a stunning route that starts in the UNESCO World Heritage Site of Vicenza, passes close to the city of Padua, and finishes at the medieval walled city of Cittadella, 25 km northeast of Vicenza. The itinerary takes in the two provinces of Vicenza and Padua and showcases the natural and architectural beauty of the Veneto with its long and deep-rooted passion for cycling.

The route design is the work of Angelo Furlan and Marco Menin, commissioned by PP Sport Events. The Women and Men 50+ categories will race on Saturday 8 October on a 140-kilometre course with 69 percent gravel and 700 metres of altitude gain, while the Men Elite and Under-49 races take place on Sunday 9 October over the same route, with the addition of a 25-kilometre final circuit that the age-group riders complete once, making 165 kilometres and 750 metres of altitude gain, and the professionals complete twice, making 190 kilometres, 73 percent gravel and 800 metres of altitude gain. The gravel sections are predominantly typical Italian white gravel roads.

The UCI Gravel World Championships are exacting from the opening kilometres, where the main climbs are concentrated. After the race start in Vicenza’s Campo Marzio, the competitors face a steep cobbled climb to the sanctuary of Monte Berico, followed by a series of climbs and descents as far as Sant’Agostino, before dropping down to the shore of Lake Fimon and the road to Montegaldella. The next 80 kilometres, all flat, are in the province of Padua: Selvazzano, Tancarola, Padua, and Noventa, then, along the right bank of the River Brenta, Limena, Piazzola sul Brenta and Cittadella. At this point the Men Elite and the competitors of the Men Under-49 categories start a final circuit that takes in the outlying territories of Cittadella and Tezze sul Brenta, straddling the provinces of Padua and Vicenza. The finish line is in Piazza Pierobon, at the heart of the thirteenth-century walled city.

UCI President David Lappartient said: ‘After the launch of the Trek UCI Gravel World Series and the awarding of the first two editions of the UCI Gravel World Championships, the announcement of the 2022 UCI Gravel World Championship course is a decisive step in the integration of this discipline by the UCI. Gravel is booming and is part of the unprecedented development that cycling has been undergoing for several years, particularly in its off-road variants. This development shows the population’s desire for nature and its growing awareness of the issue of sustainable development. It also shows the dynamism of our increasingly popular sport.’

Riders can qualify for the UCI Gravel World Championships at Trek UCI Gravel World Series events by finishing in the top 25% of their age category and gender. In addition, National Federations are entitled to send a selection of their best riders.

The Men Elite and Women Elite riders – members of UCI-registered teams or with a wild card from their National Federation – who win their event will be awarded the UCI World Champion’s rainbow jersey. Riders taking part in the mass participation events for their respective age category will compete for the UCI World Champion jersey specially designed for the age group winners. Races in the different categories will start in waves with small intervals.

Manager tells riders they're free to sign with other squads after efforts to secure the team's financial future fell through.